I'm new to the group, and since I have to be out of state this summer (unfortunately), I thought I should post something so I'm not totally forgotten so soon after I met most of you...

Summer has been hectic...here's a summary: I was married on May 23rd in Minneapolis, and then left for 10 days in Playa Del Carmen, Mexico. Less than a week after I returned to Minneapolis, I left for 10 days in Japan. I presented a paper at a circuit design conference, but figured as long as I'd be half way around the world, I really had to spend some time touring. Less than a week after I got back from Japan, I moved to Austin, TX for a few months to do another internship with IBM Research. I'm about ready to finish my PhD in CMOS circuit design at the U of MN, but it's not a great time to be looking for jobs, so I'm kind of waiting out the worst part of the recession before finishing up. Therefore, coming back to Austin (for my 3rd stint here) provided me with a chance to get some more experience and earn a decent paycheck for awhile.

The summer in Austin is always a killer, but this summer has been one of their worst ever. The high temp has been over 100 almost every day since I arrived at the end of June. And, no, it's NOT a dry heat. So although the temps "cool down" to a little under 80F in the early morning, the humidity is usually ~80%. There is no choice but to deal with this if you want to run or rollerski outdoors, so we just get used to it and accept that paces won't be quite as fast.

Although some weekend traveling has interrupted my training schedule a couple times, here is a normal week for me now:

Hope you are all enjoying the cool weather up north!

ps. here are some pics from my travels: 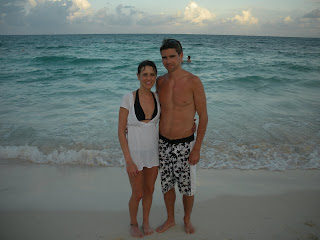 The new wife (Sarah) and I in Mexico. 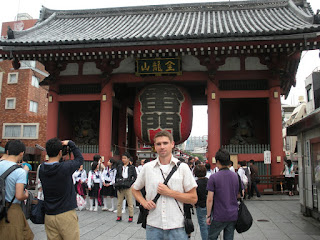 Sensōji Temple in Asakusa. It's a Buddhist temple, and Tokyo's oldest. In this picture you actually see the Kaminarimon, or “Thunder Gate". The temple is behind that.
Posted by John Keane at 11:02 AM 3 comments:

Train when you can

So this is finals week for me. Hopefully, the last finals week of my life. (I just think back to how many tests and exams I have taken over the last 26 years and cringe). But as with most finals weeks, my training has taken a bit of a hit. I have a final early in the morning on Mon, Tues and Wed mornings, but I will still be in the clinic after that until 4pm, leaving little time to both study and get a workout of any substance.

My plan for yesterday was to try and get a short run in once I got home just to clear my head before I started studying for this morning's TMD/orofacial pain exam. All was going to plan when at the Franklin Ave light rail station (I ride the train to a park-and-ride every day) it was announced that the train would be going no further. Apparently there had been a crash further down the line. When this happens buses come and shuttle people to the next stops, but there are thousands of people that take the train, and the people around me were mumbling that the last time this happened the buses never really showed up. So I decided that I should at least start moving towards my car, since walking put me closer to home than standing waiting for a bus that I did not know if it would ever show. When I got to Lake street I could see a news chopper hovering over the next station. I figured that that is where the crash was, and about this time I also figured I should really try to use my time wisely and double-task. So I cinched up my back pack and started to run. I am sure I got some strange looks from the cars on 55 as I ran along with my backpack and lunch pail, but because of the crash I was actually going faster than they were. The crash site its self was pretty bad. I guess some guy decided to try and drive around the crossing arms and drove right in front of an oncoming train (really, how stupid can you be?). I just kept on running to the next station, and since I was now on the opposite side of the crash, I was able to catch a bus to my car. All total I got 20 minutes of running in, and although that really is not much to write home about, what I have learned is that 20 minutes is better that nothing (a point that Chad Giese drove home earlier this year in talking about his transition to full time job with a young kid), and that fitting in little extra workouts can add up. Its why I do push ups in the morning while waiting for my oatmeal to cook in the microwave, or do pull ups every time I go down to my basement. If I can't always block out big chunks of time to train, I just train when I can.
Posted by Nate at 8:36 AM No comments:

Last Thursday's practice was the second 1k double pole TT of the summer (and it was so much fun that Dave had us do it twice!). It seems like almost everyone was able to set a new personal best, and a couple people were even faster on the second 1k than the first. I felt good on the first 1k up, and my time was fast - a new course record and personal best by 5 seconds in 2:34. Bjorn started a few people back came in at 2:36, and Derek finished in 2:40. The second time up the course was tough for me though. The first thing to give out in these all out sprints is my legs, and they were getting pretty bogged down by half way up the course. I also had Bjorn starting just a couple seconds behind me, and I could hear his poles getting closer and closer. In the end I was able to hold Bjorn off, and finished faster than I thought I would in 2:37, but Bjorn killed the course in a new course record time of 2:30. The TT confirmed to me that I need to get my legs stronger. I have been putting in lots of running this year, and that has really helped my fitness, but I have been lacking in the leg strength category. I will have to find time to get to the gym for more lifting, and should ideally add some bounding to the training. At least I know what I should do, now its just whather I find the time/energy to do it.

Sunday was the first long group rollerski of the summer. Last year these group skis got very popular, drawing in most of the top skiers in the Metro at one point or another (with our biggest group being 28 people). Every year we move the start date further up the calender than the last year, so I wasn't sure how many people would be up for the long group skis on August 1st, but there must have been some pent up demand since we still drew a group of 12, including olympian Carolyn Bramante and national champ Caitlin Compton, among others.

The discussion on these long skis often involves how fast we (as individuals) should be going. The course that we take around Afton always includes plenty of out and back sections that allow for regrouping, but some people are better at going there own pace than others. I know that I have probably "won" a few to many hills on these long skis. Caitlin is inspiring on these long skis not for how fast she goes, but for how slow she takes these long skis. She is a master of the "ski slow to ski fast" mentality. My struggle is always how to adapt this to my training. She is training twice (or three times) as many hours as I am in any given week, and she has to keep her long skis easy so that she can hit her intervals hard. I am often not able to get in a workout every day, and so have more recovery built in to a given week, but does this mean that I should be taking the long skis harder? This week was easy to go slow since I raced a half marathon the day before (and set a new PB by over a minute!), and needed the recovery. Next week will be the real challenge to hold myself back.

Anyone have any thoughts?
Posted by Nate at 8:27 AM No comments: