Boulder Lake was my first race this year. I've been very busy with work and family and this was my first opportunity to race. I knew I shouldn't put it off any longer if I wanted to not bonk at the Birkie, and figured this would be a relatively easy one to start with. In past years, it has felt relatively easy, but not this one. I guess I can handle a course like that when I'm in shape, but that's not the case this year. I haven't done nearly as much intensity as I normally do because I haven't had the time, or more importantly the energy, to do much. Boulder is a very flat course. There is virtually no rest on a course like that, which is hard for me to take. I need a rolling course to let the lactates clear. The weather turned out warmer than expected so my wax was a bit slow. Not terrible, but not great. (The weather forecasts have not been reliable this year and seem to change significantly in just hours making it hard to wax ahead.) I went out just a tad fast but finally established a comfortable pace about 5k in. The next 10-15k were good. I felt pretty good and was just the right temperature. At the end of the second lap, things took a down turn. I started feeling cold and that is always a sign that I'm getting tired. Then the muscles in my left thigh started to twinge and cramp. Every little downhill I could find, which were precious few and far between, I would get into a tuck and dig my elbows into my thigh to try and rub the cramps out. They would feel better for a bit, and then start tightening up again. After several k's of this, my right leg started feeling tired too, then my arms. The last couple k were just survival mode. I was so glad to be done. I'd driven up with Cheryl and we were both tired so we didn't do much of a warm down before heading home. I was so cold and tired and hungry. Cheryl had a decent race and finished just behind me, but had skied hard and wasn't feeling the greatest either. I at least felt that I had put 'money in the bank' as Cheryl had said.
Posted by Angie Robinson at 9:25 PM No comments:

Nate and I loaded up in a car with a few other skiers this weekend to head up to the Balsam Vinterfest.  The race is on the Garfield county park trails, which were my home trails growing up and where I learned to ski, so I'm always excited to get back and ski them.  We stayed at my parents Friday night and they fed us some noodle hotdish, a good carbo loading meal.  The trails are really fun to ski, they are rolling and windy enough to stay interesting, but still flow well.
The race has a nice small town feel, no chip timing, only one feed station at the lap, and about 60 skiers total.  Which is good because the trails are narrow and there aren't many great places for passing.  When the trails are icy there can be some tricky downhills, but with the fresh soft snow everything could be taken at full speed with no problems.  The groomers had been hard at work to pack down the new snow we got the night before and the trails were in great shape.

Working on starts during practice last week was at least somewhat helpful, as was the extra elbow room at the start line.  I was the second one off the line and Nate tucked in right behind me.  I took things out fast but controlled, and by the 2k mark the two of us were well away from the rest of the field.  When it became clear that the race would be between the two of us and that I wouldn't be shaking Nate off I dialed the pace back and tried to ski relaxed.  Both of us were skiing on Fastwax Green and our skis seemed to be running fast and just about even, so there would be no advantage to be gained there.

We traded off the lead a couple times, but Nate was climbing better than I was, so slowly a gap formed.  I pushed to close it a couple times, but that took it's toll and eventually I just couldn't keep contact.  I kept Nate in sight all the way to the final downhill, but there was nothing I could do to bridge back up to him.  Nate won the race in 57:30, I was 40 seconds back, and it was another 5 minutes behind me to third place.
It was a great day to be out racing, and fun to have a Vakava train leading the race.  Next weekend is Seeley Hills Classic, a chance to see how Nate and I stack up in a classic race.
Posted by Craig at 10:41 AM 1 comment:

Thanks City of Lakes Loppet Foundation for putting on a great quality race!  The trails were in great shape and the temperatures were about as good as it gets, especially this year.

My day of racing was a success even before the 17 km race started.  My biggest measure of success these days is getting all my kids to the start line on time and with kick wax that actually works for them.  Whew! the Swix VR 60 was the ticket, thanks Piotr .  Caden (10) won his U12 5km race, Bryce (8) was second in his 2km U10 race, and Ethan (5) was 7th out of 12 in his 7 and under race.  Ethan only fell three times and only cried once; quite an improvement from the Twin Cities Championships when he said, "I fell 29 times and cried the whole way".  Thursday evening, Ethan put his tooth through his lip skiing at Wirth; I was proud of him for just getting out there on Saturday. 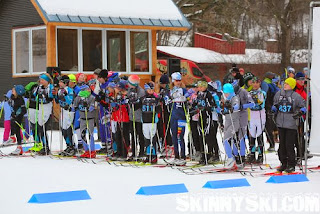 Start of the Youth 5km Classic Race (Caden is wearing the bright blue hat and grey MYSL suit)
I lined up for the start of the 17 km without a warm-up, well I guess running after my kids for the last couple hours would count as a warm-up.  Just after the start, there was a pile-up right in front of me; I narrowly avoided it, but lost precious time in the process.  My skis felt fast (I waxed with Fast Wax's HSLF 10 teal, followed by HSF 10 green, and a final coat of Flight Cold using the Base Saver to apply it).  I also waxed my kids' skis with Fast Wax and they were very happy with their skis. 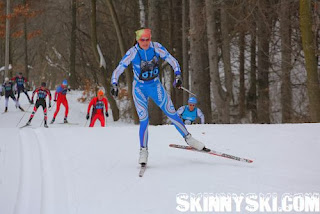 Bonnie Skiing the Pre-Loppet
I didn't look at the course map before the race, so I wasn't sure where I was on the course or what kilometer I was at.  I saw my son, Josh, cheering me on around the time I was entering Wirth Lake for the second time.  I asked him "how far to the finish", thinking it was between 2-4 kilometers.  He said it was just across the lake. 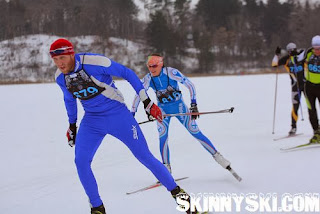 Posted by Bonnie Weiskopf at 4:49 PM No comments:

I had fun watching three of my sons race in the Twin Cities Championships today (U12, U10, and U8).  Endurance United put on a nicely run race.  It's always a bonus if my kids all stay on course and don't get lost.  Of my three kids racing, two took top honors in their respective age categories.  My five year old didn't quite make the podium.  He said, "I fell twenty nine times" and cried the whole way.  We all have a day like this once in a while!  My 9th grade son raced in a continuous pursuit at Theodore Wirth.

Even though I wasn't able to race today, I did get a very nice ski at Lake Elmo Park Reserve later in the day.  I skied on a new pair of classic Atomic skis I bought from Finn Sisu.  I'm embarrassed to say it took me over a month to put them at the top of my family's ski waxing priority pile.  To prep them I ironed in a thick layer of Fast Wax's fluoro Hot Box wax, let the wax completely cool, then re-ironed them.  Next I put on a layer of Fast Wax's fluoro base wax, then one layer of blue.  They were really fast!  Finn Sisu did a great job fitting me with these skis; they are really fun and kick/glide really nicely.

Hope you all enjoyed the relatively warm weather today.
Posted by Bonnie Weiskopf at 10:21 PM No comments: