My husband organizes a pickup Ultimate Frisbee game every Saturday morning with friends. It's the same group of people that I started playing with 20 years ago and were I got to know Jim. They play year round and he claims playing in the winter is the most fun because you can dive for the frisbee without getting hurt. It's a very different game in the snow since you can't run and maneuver like you can on grass. I'm always too busy skiing in the winter to play with them but I usually start up in the spring after I've gotten my legs used to running again. Yesterday was my first game of the season. I haven't done any kind of intensity for some time but I can still run pretty fast when I need to. I just can't help myself and ran pretty hard. It amazes my how it makes my whole body hurt when I start playing again. It truly is a full body sport. My arms, shoulders, back, quads, hip flexors, and even my feet are sore today. My feet must be sore from all the cutting back and forth. The soreness is coming and going in different parts of my body at different rates. My quads and hip flexors were too sore to run today. Hopefully I'll be up for another hard go by next Saturday. 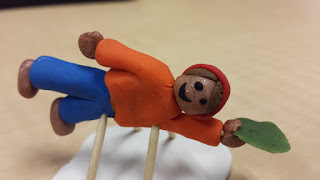 This is a little figurine of a person diving for a disk that my nephew gave Jim. Isn't it cute?!
Posted by Angie Robinson at 10:25 PM No comments:

Artificial Winter
Each year around April, I like to reflect on my ski season and the training leading up to it.  2015-2016 was my best training year ever in terms of volume, intervals, and still feeling very strong. This training reflected in a “better than I dreamed of” Twin Cities Marathon and was hoping it would catapult me towards some “too good to be true” ski results, but that didn’t quite happen.
There were the not-so-good races. Namely, the series of sprint races I did (Hoigaard’s Relays and the new Master Blaster Series sponsored by Fulton). I have never considered myself a sprinter and still don’t; but doing these sprint races are supposed to make me better, right? Then there was that Ski-Orienteering race as part of the City of Lakes Loppet I really should have cherry picked….and when I didn’t, I was left feeling salty. And then there was the Lake Louise Loppet that left me crying on the course (icing is never fun)!
There were the so-so races: the 5 km team time trial at Elm Creek and the 42 km skate City of Lakes Loppet. My goal at the time trial was to show some improvement over the previous year. It is always hard to judge when competition and snow speed are different. I couldn’t really determine if I was any faster in either the skate or the classic. In the City of Lakes Loppet I just did not feel on top of my game the whole race but ended in 16th place for women which tells me that even on a so-so day I’m not that far back.

Then there were the good races: 42 km Classic Mora Vasaloppet, 30 km Classic Boulder Lake Race, 20 km Classic Finlandia, and 55 km Classic Birkie. The Mora Vasaloppet was fun because I skied with the two lead women (Josie Nelson and Kathleen DeWahl) for about 13 km before getting dropped when I fell. I’ve never stayed with either of those women that long before so I think that at least shows some progress in my double pole. Although I cherry picked Boulder Lake and Finlandia, I was proud of myself for really racing the men and Boulder Lake was the first race I have ever won outright (men and women) AND got to ski with my bro! While I narrowly missed a top 10 at Birkie, I really can’t complain about 11th place. Besides, had I done much better, it would make it hard to set goals for next season.

While there were the races, I spent much more of my ski time training. And in both races and training, I did many, many, many loops on man-made snow. We spent Thanksgiving week in Colorado on natural snow which seemed to make the December loops more tolerable but by the middle of January it was getting mundane. Hyland’s snow-making loop is amazing; however, 60 km there one weekend were 20 too many.
By the end of January, my husband Erik, quipped “I need an adventure.”
Skiing and racing loops on man-made snow is not very adventurous.
All my early season races were on man-made snow and then Mora was saved by the little snow gun that could, so hence, only partially on man-made snow.
Entirely man-made races: Hoigaards, Elm Creek Time Trial, Three Rivers Rennet, Fulton Races at Wirth (2 total). This was 5 of my 11 races.

Partial man-made races: City of Lakes Loppet, Mora Vasaloppet
All natural snow races: Boulder Lake, Birkie, Finlandia, Lake Louise Loppet (not sure if this one counts...I did not wax my skis for this race).
In March we headed to Canmore to watch the World Cups and ski on more man-made snow. Canmore has about 20 km of man-made snow! The snow was dirty and since I felt deprived of abundant snow, winter still seemed missing.

But then there was Lake Louise and Mount Shark. Both locations, higher in elevation than Canmore, offered a true winter experience and provided for just enough real snow time to complete winter.

So I was curious to know just how many hours and km I spent skiing at Wirth, Elm Creek, and Hyland this year. Being as Wirth’s loop didn’t open til mid-January, I spent only 6.4 hours skiing there and logged 67 km (time and distance is a bit funny because 2 of the times I skied there were for team sprint races). I skied 20 hours at Elm Creek for a total of 300 km (that’s 120 laps of a 2.5 km loop). By far I skied the most at Hyland- 44 hours in total resulting in 544 km (of which over ⅓ occurred in December when the loop was less than 2 km). That is a lot of time and distance on man-made snow. This is why when I reflect on my 2015-2016 season, two words come to mind: Artificial Winter.
In summary, I think all this training on man-made snow boils down to two points. First, this is indicative of snow conditions in Minnesota. This is not a post about global warming so I will merely state we do not get a lot of snow in the Twin Cities and given that we have so much man-made snow, this is not an unusual winter. Second, this shows just how crazy I am in my desire/need/ambition to continue to train that I spend so much time going around in circles. I seriously wonder how sustainable this is in the future which is why in December I often elected to run or rollerski instead of drive to a man-made loop. It also begs the question, how many hours does a competitive master athlete need to spend training on snow in an artificial winter?
Posted by Elspeth Ronnander at 8:28 PM No comments: