10 Reasons to Ski the Minnesota Finlandia

10. You get to ski UP a DOWNHILL ski run

9. Half the price of the Birkie

6. There is no line for the port-a-potties

5. If the race is cancelled, you can rollover your registration to next year. They call this the global warming guarantee.

4. You don’t have to worry about any damage during road crossings thanks to the Terrific Two Way Tunnel of Temptation!

3. Practice for the American Ninja warrior by skiing up something called The Wall

2. You can park 20 feet from the start, stay warm in your car, and get in the front row of the
start line 5 minutes before the race

1. The prizes! (all very useable) Don’t believe me? Check out this video:
https://www.youtube.com/watch?v=w9nRINv7lfA


To register go to: http://www.minnesotafinlandia.com/index.html
Posted by Elspeth Ronnander at 8:02 AM 1 comment: 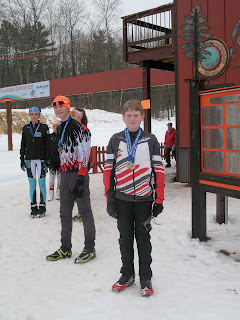 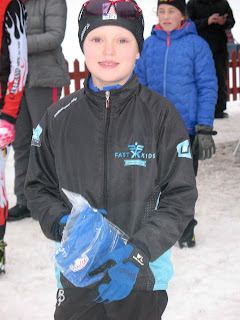 Posted by Bonnie Weiskopf at 2:01 PM No comments:

Vakava had a great day last Wednesday, January 18th, at the Fulton Cup.  We had a surprise showing from our friend and very elite team-mate, Caitlin Gregg.  Caitlin rounded out our top 3 Vakava skiers and helped us secure an overall title for our third consecutive year.  This was my first time racing in the Fulton Cup.  Unfortunately, I was late in arriving and wasn't able to get a parking spot in time for the skate race, which starts 1/2 hour before the classic race.  I ended up 2nd female in the classic race, behind team-mate Caitin Gregg.  I was less than a second behind team-mate David Christopherson.  The results are completely messed up, they don't even have me listed and they have skiers and their times incorrect throughout.

My skis were fast.  I was in a hurry so I corked in some Fastwax Race Pro Warm.  This stuff is amazing!  It's so quick and easy to apply and it lasted well past my 5km race.  If only parking at the race venue were as easy as applying Fastwax I wouldn't have missed my first race.
Posted by Bonnie Weiskopf at 1:22 PM No comments:

Justification (for doing the short race at Seeley Hills Classic)

A few months ago I wrote about the discrepancy between the number of women who do short versus long distances at cross country ski races. I was poignantly aware of this as I registered for the 22 kilometer race at Seeley Hills Classic although there is a 42 kilometer distance. This prompts me to make a justification for my cop out to do the shorter distance.

First, I am not wimpy. Last year I completed my 44th ski marathon on my 31st birthday. I train 12-15 hours per week in all kinds of weather. I go backcountry camping. And my January races are just warm-up races for three planned (weather permitting) ski marathons in February. And I might just continue racing into March and possibly even April (24 Hours of Lappe)!

Second, I’ve only done the Seeley Hills Classic race once before. That was back in 2006 when I was 20. All my female teammates on the U of M ski team were doing the 22 kilometer race and I recall it being the first time I actually felt like I was “racing” a ski race since high school. I have fond memories of that feeling of racing (at the time I was mostly doing marathon distances and didn’t feel competitive at those longer distances yet) and enjoyed the shorter distance. Since I have such fond memories of this race, I obviously wanted to do it again.

Third, because the shorter race is usually less competitive, I have better odds to win; and doesn’t winning, or at least the possibility of winning, sound like fun?

Fourth, I think I’ve become a better, faster skier and I can only benchmark my progress by doing the race distance I’ve done in the past.

Fifth, I race the Birkie Classic. Since Seeley Hills Classic follows a similar course, it’s fairly similar to racing the Birkie. And the Birkie Classic is a very long, hard, grueling race. I’m not sure I can will myself to do it more than once a year.

Seventh, lately I’ve been trying to have more fun in life. For all the above mentioned reasons, the shorter 22 kilometer race seemed like the most fun, so that’s why I did it.
Finally, I’m not sure I need to justify myself to anyone but myself. Maybe I wouldn’t even feel I need to justify myself except for that previous blog post. But I’m always trying to feel hardy compared to my husband and male friends who always race the longest distances and that’s why I feel the justification is in order...even though no justification would be good enough...I’ve copped out because I’m a girl. But here’s something to consider, because I’m slower than them, I will spend much more cumulative time racing than them throughout the year, so I’m just trying to make racing time equal!


As for the actual race, well, it was pretty short. I didn’t go sprint or 5 kilometer pace hard but I gave a solid effort throughout and never thought about holding back.

In the starting area, I looked around for all the women but there were too many to keep track of. I got to the start a bit late and ended up in the 4th row (still ahead of most of the skiers). Ryan Peterson, one of my guy friends, was in the front of my row. He has decided to start classic skiing this year and when I found this out a couple months ago my exact words were “you are going down.” Nevermind that he’s a strong, in shape guy who can cream me in a running race. He wasn’t wearing spandex and seemed quite averse to the idea. I was hoping to beat him as I’m quite competitive, even with the guys.

We started and I tried to go as fast as possible but found myself completely boxed in by two slow men on the first short uphill. I had to come to a complete stop and then switch a couple tracks to get around those men. Next I had to bridge a big gap up to the leaders but since they were the race leaders I never caught those guys. I did have to work hard to catch a couple women. On the first big downhill I passed a guy snowplowing...I dunno how he got ahead of me at the start!

After I caught the women I skied around them for awhile but could see another woman farther up who was always striding away. She had much better technique than me. I’ve been working a lot on my striding technique to get glide and not just run but conditions were fairly slow and so I wasn’t getting much glide. I pulled ahead of the two women around me on a big uphill only to realize I was quite tired after doing so and didn’t feel like I was putting much effort into my double pole. One of those women passed me shortly before the turn around and the other one got me after the turnaround as well as another woman. Now I was in 5th place for women assuming I had counted all the women in front of me which is hard to do. Indeed, I had missed a woman and so was actually in 6th.

At the turn around I could tell I was gaining on Ryan. He stayed a bit in front of me but I put in a good surge and caught him on an uphill about three quarters into the race. Unfortunately for me, as I came up even with him, he got more motivated than me and sped up and I never could catch him again. So much for my smack talk.

For the remainder of the race I didn’t pass anyone and no one passed me. I kept going but lacked real mojo to push really hard and my skis seemed slow in the cold new snow. My double pole seemed to lack power, or oomph, but maybe that was just because the snow was slow. I had ate a normal amount for breakfast but it was too much as I felt like I had to burp the whole race. This has happened before in classic races but I had forgotten.

Since it was cold for the start, I was wearing a hat and a buff. Every time I wear a buff I sort of feel numb to the world. There’s something constricting about it- I’ve only started wearing a buff in the past few years- that I just don’t quite feel alive and hence, on my A game. I’m not sure if this made much of a difference or not but I feel like in my buff I’m just in my “go” mode but not my “kick ass” mode.

In the end I was very glad to do the short race but I think there was a bit of rosy retrospection about that 2006 race as races are always painful and some days I tolerate that pain better than other days. It’s always hard to not be able to respond when getting passed. I ended up 6th of 89 women (got second in my age class so I got a my-size plate!) and 39 of 297 racers. Compare that to my results back in 2006 when I was 15th of 83 women and 108 of 309 total. I also calculated percent back from the winning time (in the men’s field). Back in 2006 I was 38% back but this year I was only 21% back! I calculated that had I been 38% back again I would have skied 10 minutes slower which seems like quite a lot. That definitely shows improvement although based on my performance in the race, I think there is room for more.