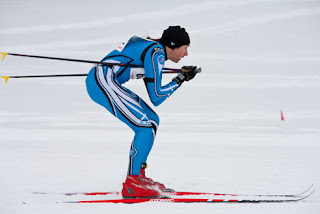 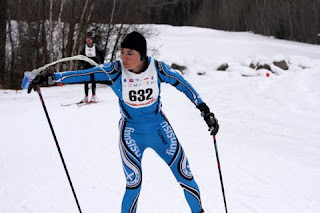 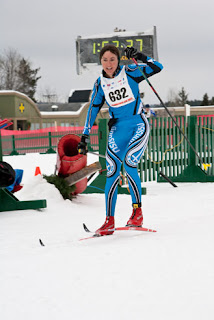 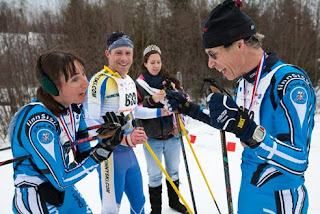 I thought it was kind of interesting that the New York Times had an article on cross country skiing and Olympian Andy Newell. ARTICLE

Posted by John Keane at 7:43 AM No comments:

So tomorrow is the start of a month of living out of a suitcase again. I am spending the entire month of February working in a clinic in Hibbing, MN - spending the weeks drilling, filling, and pulling, and every weekend driving to a different ski race. I hope to still be able to spend one night a weekend in my own bed in Red Wing, but really I am trying to pack as if I will be gone for a month. This also means that tomorrow will be my last Wednesday night Vakava practice of the racing season. That will probably be the hardest part of being gone for the month - the training on my own. It is so nice to know that I will be getting at least one good hard workout with other skiers a week. At least I will see most of the team at the races!

A quick call from Caitlin, another long post from me.

We had a big group at practice tonight. Seems to always be the case when Ahvo is going to be there. He really is something to see. He is so good with picking out minor (or major) changes in people's technique, and he is so quick for a 63 year old guy. We were working on V1 turnover on short uphills, and he can still "dance" up those hills with the best of them.

At the end of practice we had a group call with Caitlin Compton. All of us huddled around the phone and got to congratulate her for making the Olympic team. Caitlin seemed really excited to have everything work out. She said that when she got the call yesterday that she almost didn't want to answer it in case it was bad news. It has certainly not been an easy (or typical) road for her, but she has definatly put in the work and deserves her spot on the team. She told us that she is looking forward to putting in a good block of training at altitude before heading to the races in Canmore. She was also looking forward to catching up with fellow Twin Cities skier Garrott Kuzzy, and was quite optimistic that he would be on the team too within the next two weeks.

Last weekend was the second skinnyski series race at Boulder Lake. Vakava had a strong showing, although we will have to wait until the after Jan 22nd to hear which cheaters that Peter Hanson will cherry pick for his team. We are hoping to have a strong team for this year to at least give him a run for his money. The hardest part is picking a roster of only 12 (our team is 20+ skiers strong this year).

Personally my race was tough but fun. The conditions were not at all what I expected. I had visions of a fast, firm trail after the warmer weather earlier in the week, but the trail was mashed potatoes, and my poles punched in 6" or more every time I polled. In my opinion the conditions favored a skier with stronger legs and a bigger engine. I am more of an arms skiers and I tend to exploit my glide - neither of which was easy to do. That and I am not in quite as good of shape as I was hoping to be in this year. From the gun the pace was fast (the 10k skiers start at the same time and do one lap instead of three). There were only 3 guys who were able to go with the fastest 10k guy, and I was in the first chase group (which was probably 12 guys big). I spent most of the race in the first 3 of that group, spending what I considered to be a fair amount of time at the front doing some leading. At about the 20k point of the race I was in second or third in the group when my ski hit one of the large divots of mushy snow and in my state of off balance I polled between my legs. I went down hard, crotch first onto the trail. The other skiers in the group were able to avoid me, but I was left to pick myself up, try to convince my stomach move out of my throat, and make my way back to the group. That took me a couple of kilometers, but I was soon able to hang at the back and recover. By the last few kilometers as the pace was picking up I was able to move through the group to the top 3, and in the sprint across the lake I was only beaten by Nikolai Anikin to the line. It was a pretty good showing and a lot of fun.

Sorry if I missed anyone. That is a lot of people racing!
Posted by Nate at 10:12 PM No comments:

Here are some random thoughts:
1. One of my classmates that I spent Dec. in Hibbing with sent me a pic that he took while we were up there. One of the last nights that we were there we went out to the lake (there was no snow on the trails) and skied around. Two of them had never skied before, but one of my classmates in dental school is Renee Kinney (skied for Stillwater HS, U of Vermont and Team Birkie), and so between her and I there was equipment to use. It was fun to all get out on skis together. 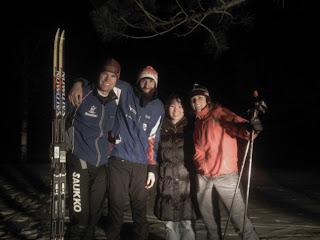 2. I was very sad to hear that Cindy Brochman had passed away after her long battle with cancer. She ran with Nichole on the run n fun team, and I only ever heard good things about her.

3. I did the TC Championships this past weekend, and it was a ton of fun. I am looking forward to skiing it next year, and hopefully I will get out on classic skis a bit more before that race. This year I got out great at the start (and avoided the large pile-up), but I did not have the fitness to stick with the leaders. This kind of worries me, since I signed up for the long race at all of the big races this year (COLL, Mora, Birkie). It also could be because I am not as good of a classic skier. The skate race on Sunday went well. Even though I still lost more time to Bjorn and Matt than I would have liked, I was able to post the 5th fastest skate time of the day and catch a number of guys who beat me in the classic race.

Vakava skiers (and others we claim as our own) at TC Champs: 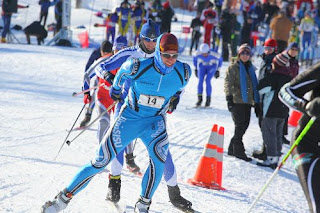