This past Sunday was the Como Championships 10k. This was my first chance to race this season, and I was using the weekend as a chance to bust some rust out of the legs (I couldn't take the race too seriously since Christmas was the day before, and I was not going to ignore all the food and cookies).


This was also my first chance to wear the new Vakava racing suits. The past couple of years the Vakava team has just worn the Finn Sisu suits, but since the team has gotten pretty established we decided to make our own suits. Derek (who is a graphic designer when he is not skiing fast) took my Finn Sisu suit design and made a few changes and also created the great Vakava Racing logo (that you see at the top of this blog), to come up with our new suit design. I personally think it looks very sharp, and I got a couple of compliments on the new suit at the race. 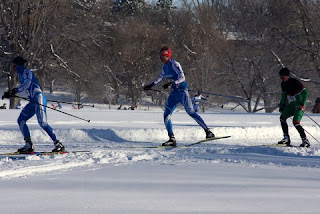 The conditions at como were awesome! I have been skiing in Red Wing (where I live) most of the time, and it has gotten to the point that we have too much snow for the goomers to handle without a piston bully. Almost every pole push sinks down 8" or more. Getting to como and finding firm, fast conditions was fantastic. Skiing is so much more fun - and a lot easier!

The race started out on a nice wide starting line, but it narrowed quite quickly. I have not put in nearly as many hours this year as in past years (working for a living really cuts into my training time!), so I was a bit cautious at the start. I sure didn't plan on trying to keeping up with the CXC guys who I knew would be flying from the start. My plan was to ski relaxed for the first 5k, and then see how I felt from there. When the gun went off I got out in about 12th or 15th place - probably a bit further back than I wanted to be, but I was able to stay relaxed and ski easy. Right from the start, and as predicted, the 2 CXC guys took off and 4 skiers went with them. The rest of field formed its own big pack. After about 2k I found myself at the front of this big pack and slowly reeled in the 2 skiers who had obviously started to hard and had been spit off the back of the lead pack.

At the 4k point I stepped to the side to let someone else lead. Much to my suprise there were still about a dozen skiers in our pack. Jon Miller and fellow Vakava skier Eugene went around me to pull, and I stepped back in to the 3rd position in the pack. There was a bit of jockying for position, but I still tried to stay focused on skiing smooth and relaxed. As we went through the 5k lap point, the timers said that we were 25 seconds back from the other 2 skiers that had been dropped by the CXC guys. We skied along through the second lap, and at about 7k a new skier went to the front a put in a surge. I was in the 3rd or 4th position in the pack and went around to bridge to gap. I was suprised at how much of an extra gear I had. This was the thing I was most worried about since my training has been less than ideal, and this was my first race, but I had no problem surging up to the skier who had broken away. At this point our big pack began to splinter a bit, although a few skiers were still able to match our increased speed. At the second to last "big" hill on the course at about 8k, the front skier surged again, and flew up the hill. I again matched his speed, but this time we were not followed. At the top he stepped to the side and asked me to pull. I went to the front and pushed. I could see the 2 skiers ahead of us, and we were certainly making up ground on them. The last 2k were a blur, since I was just pushing as hard as I could to make sure no one could sprint around me. I made up a fair amount of ground in the last bit, but we had spotted the front pack far too much ground in the first lap. I came in 5th overall, less than 20 seconds behind the 4th skier. 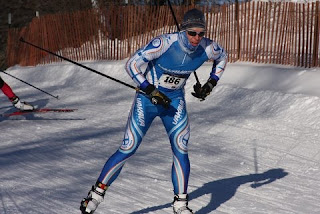 I felt great about my race. It was great conditions, I had rocket skis (Fast Wax Green and a Finn Sisu fine grind), and I was able to go hard and feel like I was racing.

As the sun was setting this evening and my kids were returning home from school, I was waxing five rather dull looking skis. Yes, I ignored the golden rule of ski care and left the skis unwaxed since last spring! My husband returned home from work as I was finishing the last pair. An hour later all the kids (ages 2-11) were dressed for one digit temperatures and had a snack that would hopefully tide them over for a couple hours. After loading up all the gear, we drove to our local high-school ski course and unloaded. The kids fought over who would wear the three headlamps we had in our possession. Five minutes into the ski my nine year old fell to the ground complaining of cold hands, feet, and skis that were too soft. I was still feeling optimistic, four of the five were still not complaining. The nine year old and my husband headed back to the car. I was now in charge of keeping the other four from getting lost in the complete darkness that was lit only by a fingernail moon. My two year old kept a steady pace, even as his five year old brother tried repeatedly to run him over head on. Keeping the younger two together, I watched as the darkness seemed to swallow my seven and eleven year olds as they skated away along the trail. After nearly an hour had passed the young crew was ready to share the car with their sister. My husband and two boys skied one last loop before calling it a night.
To save time we drove directly to a Burger King for dinner. We raised a few eyebrows with our attire, and shared a good conversation about family with a restaurant patron. Years ago, when I was in my twenties, I never would have imagined that a night like this would be fairly typical. Life is a ton of work, but unexpectedly good.
Posted by Bonnie Weiskopf at 10:23 PM 1 comment: