The first thing is that I'm doing strength more consistently. I've never been a big fan of strength since I don't enjoy it very much and because it makes me feel heavy and tired so I feel like my intensity workouts suffer. I figure that if I can't do both, that intensity will give me more speed than strength, so strength has been a low priority. I've wanted to figure out how to incorporate more of it without making training a drudgery and causing my intensity to suffer. So I've just tried to do a little bit more regularly, at least once and preferably twice a week. I don't do a lot in a session, I just make sure I do something. Some sessions are pretty short because I'm tired and just don't feel like doing it, but at least I do something. If nothing else, I know from experience that regular general strength helps prevent injury and that is a good thing at my age.

I've also been stretching regularly. Again, not a lot, but consistently. Stretching has often felt like a chore so it's been hard for me to make a habit of it. I've been trying to change that by just doing a little bit at least once a day. Just a quick run through of all the major body parts. I've been taking a break during work to walk to the end of the parking lot where there is a little shaded sitting area and do a quick set of stretches. It doesn't feel like a chore this way since it's a nice mental break from work. I think this also helps prevent injury at my age. I'll have to figure out a good place to take my break during the winter when the snow comes.

The biggest change I've made is that I'm trying to polarize my workouts and weeks more. All of my intensity work has been fairly high and the easy days easier. I've also been doing a regimen where I alternate hard and easy weeks with one week of three intensity days and one week of just one intensity day. This way you still average two intensity days a week over time but there is a greater difference between the hard and easy weeks. The first month of that I thought it might do me in. The hard weeks were really, really hard and then the easy weeks required that I go at level 1 because I was too tired to do anything else. The second month wasn't so bad so I decided to keep at it and see what happens. I'm on my third month of this and my body seems to have adjusted just fine. The hard weeks feel very doable, like just another day at the office. I don't know if it's making me any faster at this point, but I do feel like it's making me tougher so that's something. I have also been doing my long easy day easier. I haven't been out to Afton on the weekend for a long ski like I have in the past. I've felt like it's too hilly to keep my heart rate low so I've been going to the Gateway instead. It's easy to keep your heart rate where ever you want it on a flat trail like that and it's a really pleasant trail. The new trail into Stillwater is wonderful. If I ski the entire thing from the Hadley parking lot to Stillwater and out to Pine Point Park and back I can do a full three hours. I've only done 2:40 so far but hope to work up to the full thing. The difference I've noticed besides going easier is that it is continuous for the entire time you're skiing since there are no downhills. There is not a single moment of rest like there is at Afton coming down the big hills. These long days leave me at least as fatigued as Afton, but in a different way. Historically I've always raced better in rolling terrain with plenty of rest between hills rather than long grinding courses with little rest. I'm hoping that these long continuous days help toughen me up for those long grinding race courses. So we'll see how the season progresses and I'll report back on my findings.

And now for a new picture on the blog. It has nothing to do with this post, I just need to put a new picture up. A friend of mine has a cycling blog (Hi Ben!) with a link to this blog. Apparently, the link shows the last picture posted from the blog, which happens to be of me sleeping after the Birkie last year. So here's one to replace it. I call it 'Neon Rainbow'. 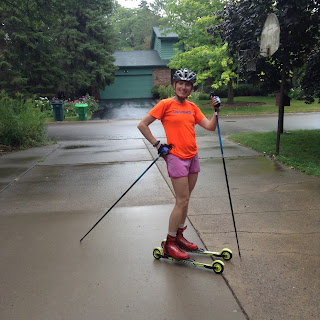