So I’m not sure why it took so long to actually get there other than it is a long ways away and I’ve been distracted by other cool places.

Every year we talk about doing the Tour of Anchorage and this year we finally decided to do it! And we lucked out with some of the best snow conditions in years! Over the past five years or so the Tour of Anchorage has been moved to machine-made loops at Kincaid a couple times because there was not enough snow. This year we got to ski the normal course.

Unfortunately Erik and I both developed colds just before leaving for Alaska. This was the worst cold we’d both had in years

Despite not feeling the greatest, we still wanted to check on the famed “Spencer Loop” on the Tour of Anchorage course. A few years ago I had read someone’s race report and took note of the big ups and scary downs in the first few kilometers of the course on the Spencer Loop. This was our first ski in the Alaska. While we did note there was a really big climb, with two lesser climbs, we found the downhills to be quite fun! No snowplowing required; however, these were 10/10 snow conditions and if the hills had been icy they would have been no fun at all.

After the ski my throat got more sore. It now felt like razorblades to swallow and I took down as much food as my pain threshold allowed. The next day my throat wasn’t any better and it was so hard to get in enough calories for not being active let alone to eat some extra for the marathon the next day. We didn’t end up skiing this day so we could try to feel better for the race. Eventually I realized that ice cream is a calorie dense food that I should eat- but even that was like swallowing razor blades.

I was glad to be feeling at least a bit better on race morning. At least my sore throat had dramatically improved. I had thought about “touring” the race but knew I was far too competitive for that. Besides, I got placed in the women’s elite wave. It was incredibly small with less than 20 of us on the start line but that at least minimized any congestion on the course. I certainly did not start hard and skied at the back of the field with a couple sisters I recognized who had done the Mora Vasaloppet a few years ago for the first couple kilometers. Then they got ahead of me. My plan was to ski the first big uphill slowly to save some energy for later on and also because I had been sick. I caught one other elite wave woman on this big long uphill and tucked in behind her. She was going really slow up hills though and so I passed her on the next big uphill section. By the time we were off the Spencer Loop I had been passed by 3 women from slower waves.

Next came my favorite section of the course that was net downhill of about 500 feet over 15 km. While the Tour of Anchorage race course weaves its way throughout the entire city, it largely does so on bike/multi-use paths that are packed but not plowed in the winter. This next section was all through some undeveloped land where snow clung to the pine trees. I skied this part with that elite woman who skied the uphills really slowly. She was much faster on the gradual downhill. Eventually I passed her on a big overpass bridge across a busy street.

The next part started fun but got tiring. We crossed over roads on bridges and under roads in tunnels. See course profile below. Now I was in the 20 kms of almost completely flat trail. And this was really really flat, V-2 almost all the time flat. I kinda took off at the start of this section and passed up some people including 2 of the women from waves back who had passed me early on and was feeling good until about 30 km into the race when I got hungry. Now given that I hadn’t ate much the 2 days prior to the sore due to my sore throat, I should have started feeding immediately at each aid station in the race but I was worried about my sore throat and eating and drinking during the race with this painfully sore throat. Even the thought of orange gatorade just made my throat hurt. By 30 km into the race it became obvious though that I had to give the energy drink a try and whatever else I could get my hands on. 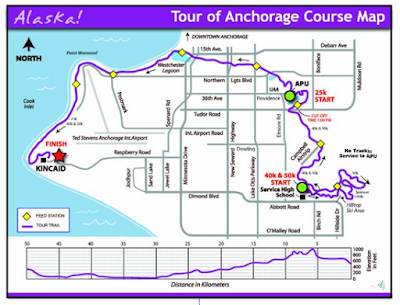 The next aid station was the most poorly run of all the stations. All of the others seemed much better. I grabbed some energy drink which was orange flavored but went down much smoother than gatorade for which I was glad. I looked for some food but no one was handing anything out. I was desperate and knew I needed some food. I spotted a plate of oreo cookies and made my way towards that and finally a volunteer grabbed the plate for me. I took two cookies and took awhile trying to take these down with my sore throat and snot-filled nose.

After this I felt better. We came out onto the ocean (or more correctly a big bay) and had mountain views! There were a few more kilometers of flat before we had a hill to climb and then what I thought would be a restful downhill but that ended up being incredibly short and after a couple more kilometers my arms just got really tired. I didn’t have any particularly sore muscles but overall my arms were just super tired. I really wanted a downhill break and some rolly terrain but all I got was a few more flat kilometers until we started a big gradual climb over the last 5 kilometers. My body was quite spent, and I dug in deep to my endurance. My pace seemed really slow those last 5 kilometers. My legs still felt strong but I felt like I couldn’t get any upper body action on my V-1. Slowly the kilometers ticked by and I could see a big uphill and an announcer area. I didn’t quite know where the finish was but it ended up being 10 feet past the crest of the hill. Perhaps I could have dug a little deeper had I known exactly where the finish was- or perhaps not.


Throughout the race I had to suppress my cough. A couple times this resulted in wave-like contractions heading down my core. I knew once I finished racing that I would cough for several hours. Indeed, I couldn’t even talk without coughing for about 2 hours after finishing. It probably wasn’t the wisest decision to race but given perfect snow conditions and traveling all this way I had to experience the Tour of Anchorage at its best.

It turns out the way to get some press is to ski with the lead women which is what Erik did. You can check out this fasterskier link to see a couple photos of Erik in the Vakava suit behind Hannah Rudd. I guess they, along with second place Michaela Keller-Miller formed quite the Minnesota pack! I’m not sure if those girls noticed what I often do, and that’s that the men skiing around them (yes, I’m talking about Erik here) don’t have great technique compared to them:)

We continued to feel sick with unusual head colds for the remainder of the week. My mother-of-a-sore throat persisted almost the entire week. Despite this we still got outside every day, enjoyed more of the perfect snow conditions, and did some scaled-back adventures. I suppose this was really killing two birds with one stone with the paid time off (PTO) and maybe is some payback for never taking days off when I’m kind of sick (not the lay in bed all day kind of sick). It was nice not to have to think about whether to go to work when sick and because we weren’t doing many adventures I managed to read an entire book. Also take note, it’s a good idea to have access to Netflix (which we did at our Airbnb) when sick. We saw plenty of animals- on TV that is!


Posted by Elspeth Ronnander at 9:06 PM No comments: