We had time trials on Wednesday which consist of a 5k skate followed by a 5k classic on rolling terrain in Afton. I hadn’t done any of the earlier ones the team did this year for various reasons so I didn’t know what to expect this time around. It turned out ok. My times weren’t as fast as they were two years ago pre-cancer, but not too far back. So I have confirmation that I really am feeling better and am encouraged. I’ve been able to train hard, unlike last year, and it feels good. Now I just need to keep up the consistency in my training and I’ll be ready for snow.

Posted by Angie Robinson at 11:13 PM No comments:

Last weekend I travelled to Cable to participate in the Birkie trail half-marathon run as well as to enjoy some other activities in the area. The run starts 10 am Saturday morning and utilizes the north portion of the Birkie trail from OO to Telemark. The trail is well maintained throughout the year and is very smooth. This together with its width gives the feeling of a road race, except for the softness of the grass underneath, a number of long steep climbs and the surrounding nature. That’s what makes this course stand out and that’s why I like it very much.
It was my second time doing the race. The day was great – temps in the 50’s, sunny, calm and the fall colors just giving their first touch to the woods. As the race started, two guys quickly separated from the field and I found myself in a spread-out group of five runners competing for the third place. A few times someone would speed up and separate from the group, but knowing how punishing those hills would be from the last year experience, I kept my pace under control. Those who separated were caught up, and at half distance I was in the front and 5 miles to go – broke away from the group. The remaining hills took their toll and although I kept the pace and finished 3rd, my legs were almost exhausted.
After the race, in the afternoon, I went to check out some biking trails. I did the Rock Lake loop (east of Cable) and Seeley Pass (from OO). The woods are great in the area – tall trees, some lakes views, no traffic noise, some areas are very remote. The first trail proved its name and turned out very rocky, which was a struggle on my steel no-suspension bike. But slower speeds gave more opportunity to look around. The Seeley pass trail is very smooth and has a fun fast long and twisty downhill. 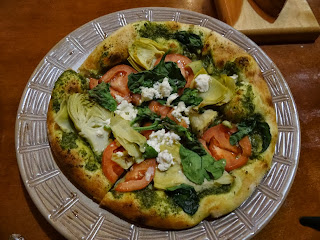 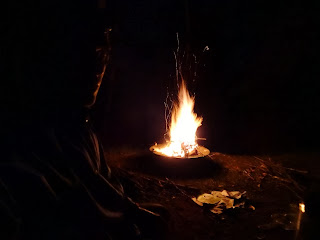 I stayed at the Two Lakes Campground, which is located in between two lakes as one might guess. Last year I rented a kayak and sailed over Lake Owen, which was really fun because the lake is thin, so little wind and always close to a shore with the actual impression of moving forward, and very clear water with plants visible through. The kayak rent was also free as it rained a bit during my ride and the owners could not believe it was fun.
In the morning, I went rollerskiing right from my site. The campground is really large so it takes about a mile just to get out. I then had a loop on Lake Owen drive and Ryberg road and then back and forth to Drummond. Those roads have almost no traffic, very rolling and twisty, deep in the woods in some places and very smooth south from the campground, making for the best place I rolleskied on.
In summary, Hayward area is awesome with all those activities to do there. I will be back there next weekend for the Vakava Fall camp and more rollerskiing. The fall colors should be at their peak and it should be great.
﻿
﻿
Posted by Eugene at 11:05 PM No comments:

The weekend after labor day I ran the sawtooth 100, part of the fall superior trail race, along with the 50 and 26.2 mile distances. I like using a long race in September to mark the change in season and training phase. September is when I switch from summer endurance work to fall speed work so a long race tells gives me something to focus on over the summer and gives me a pretty good idea of how my my endurance base is. Sawtooth is run on the superior hiking trail, which makes it a extremely rugged, tough, race, lots of rocks, lots of roots, and lots of hills. It is gnarly terrain, but its also a beautiful trail, so even if I have a tough race, I can still enjoy a pleasant day in the woods.

My race plan was pretty vague: be careful with footing and eat lots, drink lots. I asked some of the veteran runners what I should do for my first 100 miler and they said "tie your shoelaces together for the first 70 miles, go really slow, then actually start racing with 30 miles left". I didn't actually tie my shoe laces together, but I did take the pacing to heart and run pretty conservatively for the first 70 miles.

We started at 8am, and by 8:30 I could tell it was going to be a warm, humid day. I tried to be pretty careful with my pacing and pretty conscientious about drinking water and took some extra electrolyte pills at the aid stations because I could tell I was losing a lot of salt through sweat. Arriving at Silver Bay, I felt pretty fresh although it was clear that the heat was beginning to take its toll on other runners.

The section Silver Bay to Finland was challenging, lots of climbing as we made our way inland, although the 5 or 6 miles outside of Finland made for some glorious running over fast rolling terrain. I had a lot of fun on that section opening up and just running fast for fun. The climbing and heat seemed to be pretty hard on other runners, and I started seeing a lot more people running out of water and struggling to continue. I offered my last swig of water to a runner who looked particularly bad off, along with some encouragement to "keep moving".

At the Finland aid station, I picked up a dry shirt and hiking poles before the night section. Running at night were hard. I mostly hiked night, running only when the trail was smooth and I could be sure of my footing. As tricky as the night section was, the two most memorable moments of the race happened during the night. The first was arriving at sugarloaf aid station around 3am and hearing wolves in the woods. The woman at the aid station assured me that they hadn't lost anyone to wolves (yet), and that tired runners likely wouldn't taste very good to wolves anyway. Shortly after that,  around4:00am, I switched to my backup headlamp and paused for a few moments to take in how dark it in the wood, and how brilliant the stars are in that sort of darkness.

The toughest part of the race for me was from Sugarloaf to Temperance. I was really tired there but with another marathon to go, the end wasn't yet in sight. I brought up dropping out with the volunteers at Sugarloaf, Cramer Road, and Temperance, and the crews there gave me lots of support and made sure I kept going. I owe those strangers a lot, because I'm not sure I could have made it without their help and encouragement.

When the sun came up I got a little more energy, which continued to build through the day. After I made it to the top of carleton peak, I felt like the worst was behind me and started running a bit better, especially on the flats and gradual uphills. I wasn't catching anyone with my newfound "speed" (no faster than 15min/mil) but I felt good and knew I would make the finish.

I got to the finish just before 2pm, and ended up 8th overall, with a time of 29:56:58.  I didn't stop to sleep on the trail, so at the finish the first three things I did were: shower and took care of blisters on my feet, scarf down a sandwich, then take a nap. It was a tough year to be out there, so my congratulations to everyone who finished the race.

Whenever I do these races, I also see old friend and make new ones, so I was happy to unexpectedly bump into Christi, Ethan at aid stations as well as meet John and Reese at aid stations (they brought me my poles). Before, after, and during the race I was happy to see Aaron and my new friend Justin (who turn out to be brothers). I never saw Steve on the trail, but I was happy to find his name on the finishers list. I'll also reiterate my thanks to all the volunteers who kept me going through the night, I'm not sure I'd have made it without them.

This was my first 100 mile race, and the longest run I've ever done (also, longest week ever). I still don't feel back at 100% but I have been out running a few times, and I'll try do get out more this weekend. I must be close to recovered because I keep catching myself thinking "maybe I should do that again next year"; luckily registration doesn't open until march, so I have plenty of time to make up my mind.
Posted by Unknown at 12:56 PM 1 comment: