So, how come so many of us stop racing or even skiing after the Birkie?  Late-season skiing is often some of the best skiing, and the last month has been exactly that – more comfortable temperatures, more daylight, and still great trail conditions.  With yet a decent snow pack and with the really good grooming that seems to be pretty much the norm now in the Twin Cities, March has had a lot of wonderful opportunities to keep enjoying our favorite sport.

Even the late-season racing can be some of the most fun – low-key, no pressure, just get out there with your buddies and go as hard as you can for 10 k’s or so.  And those 10k’s can go by pretty quickly on March corn snow.  The Slush Rush at Elm Creek the weekend before last was absolutely perfect conditions – no slush, just immaculately groomed and lightning fast and a gorgeous sunny day.  I’d attribute my time of 22 minutes for a purportedly 10 k course to great skis and Fast Wax Cold Flite, but then pretty much everyone was flying that morning.

Even the past few days, with warmer weather and snow disappearing elsewhere, the conditions at Hyland and Wirth have been first-rate.  (Maybe especially for classic; corn snow and klister – fast and bomb-proof kick.)

I’ll move on to other things when the snow is finally gone, but until then I’m going to enjoy the skiing.
Posted by David Christopherson at 11:55 PM No comments:

Yet another chilly morning of skiing with a start temperature of -3F.  The sky was blue and the sun felt good, even if the air was cold.  This was my first ever pursuit race.  I chose to wear my skate boots for the races.  The boots felt weird during the classic race because of their stiff soles, but I adjusted.

I didn't get the best start, the front line was filled with several skiers that should have started in the middle of the pack.  It didn't take long for the field to get strung out. 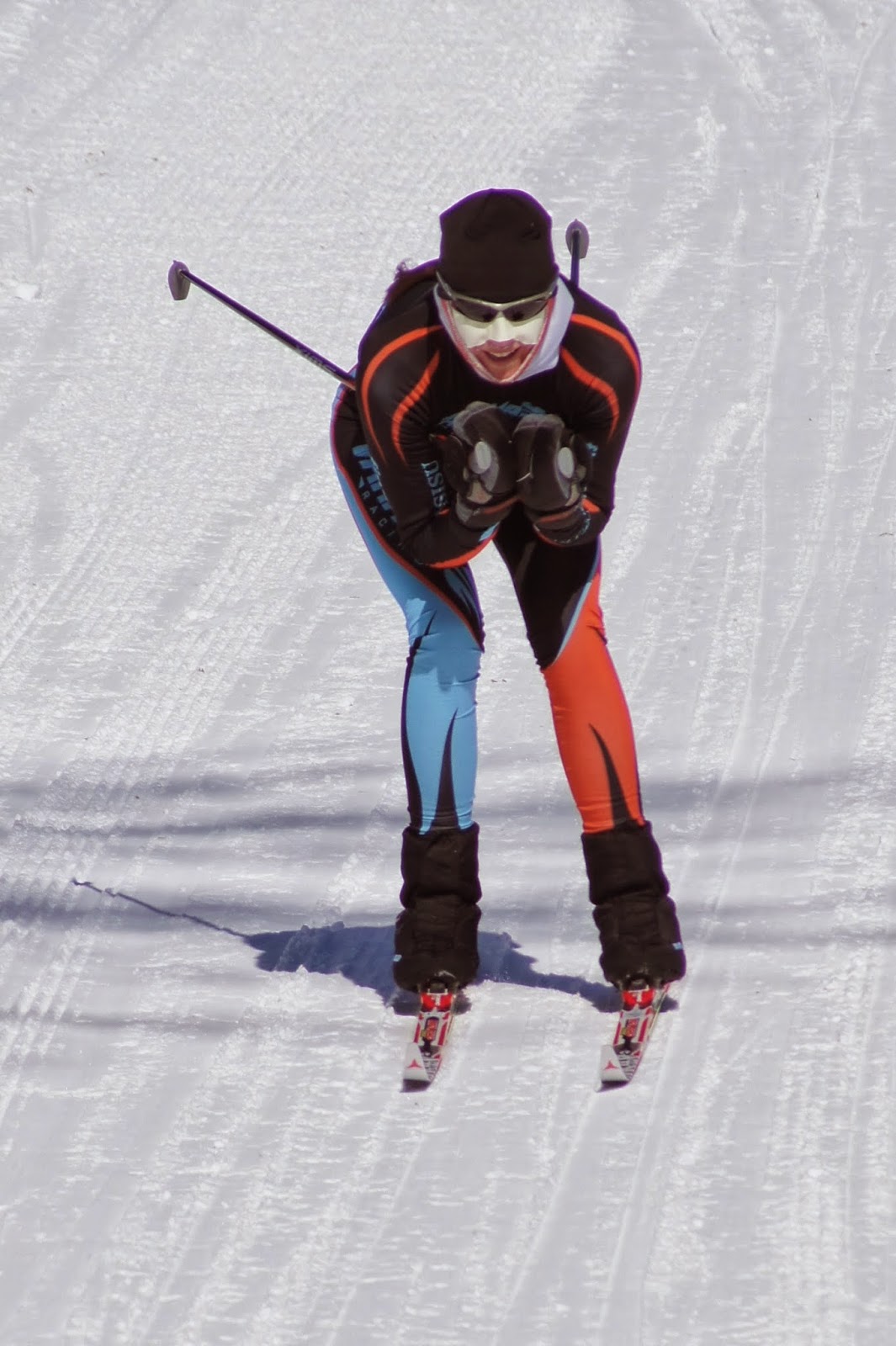 My son, Josh, had layed my skis out for me at the exchange.  The toughest part about the exchange was stuffing my lobster mitts into my pole straps.  After a couple minutes I adjusted to the skate technique and was on my way again.  The skate portion felt slow as the cold, sharp snow crystals took grip on my ski bases.  I had waxed with Fast Wax's HSLF-0, and my skis were gliding as well as anyone's out there, I just wish the conditions were faster. 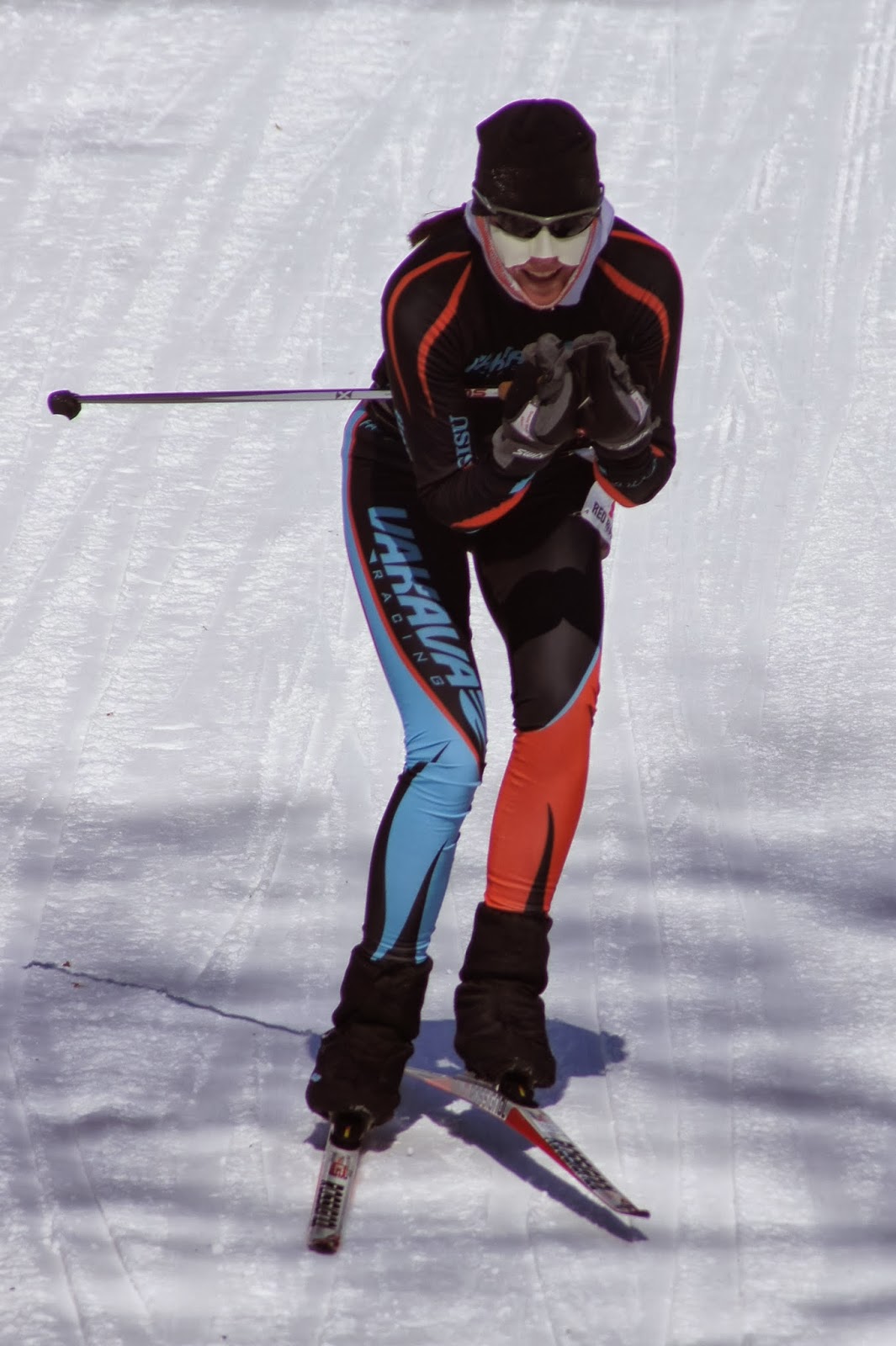 I finished 10th overall and first female.  This finish gave me enough points to claim first place in the Fast Wax Cities Cup Series.  Dave Christopherson also had a race, finishing 9th overall.
At the finish we were all treated to hot chocolate, hot apple cider, and hot dogs.  The key word here being "hot".  It all tasted good.
﻿
Posted by Bonnie Weiskopf at 12:42 PM No comments: