The Yellowstone Ski Festival has always been on my bucket list. I can't believe that this year it's really going to happen. My kids seem as excited as I am about this adventure. While I'm out there, I'm going to try a new fluorinated wax from Fast Wax, their new secret weapon.  Can't wait!
Posted by Unknown at 6:00 PM No comments:

Last weekend I took part in a couple of the races in the inaugural Minnesota State Gravel Championships bike event in Northfield.  Contrary to the official sounding name the races were low key and most of the riders were just out to have a good time.  There are some great gravel roads around Northfield, and it was great to take part in an event that showcased about 140 miles of those roads.  There were three events over the course of the weekend, a 10.5 mile time trial prologue on Saturday morning, a 55 mile stage Saturday afternoon, and a 85 mile stage Sunday morning.  I raced the time trial and the Sunday morning stage.

Saturday morning was warmer than I expected, and riding out to the race directly into a 20 mph headwind warmed me up pretty quickly even before the racing began.

Boonies Bar and Grill, the finish of the Prologue Stage

I rode the time trial on my fixed gear, just for an extra bit of challenge.  I shared a start time with Nate Porath, who was trying out his newly rebuilt single speed, and had a couple of coworkers in the time slots ahead and behind me, so I had plenty of people to gauge myself against over the course of the race.  I got a jump on Nate right off the line and was flying down the first hill, my legs spinning furiously to keep up with the bike, when all of a sudden I heard a crunching noise from my rear wheel and felt my chain go slack.  My chain was not tensioned tight enough and had jumped off the cog from the bumpy gravel descent.  Luckily it did not wrap up on the cog or in the wheel, so when my speed ran out on the uphill I stopped and quickly spun the chain back on.  I had to run the rest of the uphill because it was steep enough that I couldn't get back on the bike and get traction from a standstill.  I was on my own for the next several miles of the race until I caught sight of my co-worker Mike "the moose" Kosloski ahead of me.  I fought hard to pull him back in over the last 3 miles or so of the race, but when he turned and saw how close behind I was he put on the afterburners and held me off.  I still ended up beating him time-wise for the stage, but didn't catch up to him.

By Sunday morning the wind had died down and the sun even poked out through the clouds as the final stage got underway.  My plan was to ride conservatively for the first half of the race then crank it up if I was feeling good, a strategy that had worked out very well for me at the Inspiration gravel race this summer.  Jeff Lanners and my friend Jake came up to race this stage as well, so the three of us and a few other Northfield folks formed up a good pack a few miles into the race.  I was feeling pretty good, so I took pretty long pulls and tried to keep the pace steady and manageable so everyone would have time to take in the amazing views some of these back roads offered.  The roads were in great shape, except a few miles of freshly graded gravel that were a bit soft.  I amped the pace up to try for a Strava segment on Shady Lane, a long, steep gravel climb in Sogn Valley.  It is a minimum maintenance road, so the conditions can vary quite a bit, but it was great this weekend. 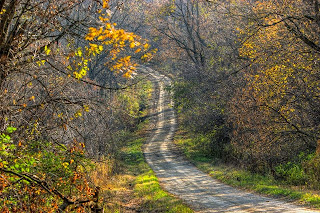 After Shady Lane there was a mandatory check in point just before mile 40.  I waited there and chatted with the volunteers and ate a cookie while I waited for Jake and Jeff.  Once we were all back together we started out, but Jeff and Jake were starting to hurt, so I ventured on alone.

This was the worst section of the course to be by myself, 20 miles directly into the wind.  The miles seemed to crawl by and every climb I could feel my energy draining.  The rider who stopped to eat caught up to me just before the town of Nerstrand.  We once again traded pulls for a bit before he got a gap on me, and then stopped again to eat.  This happened at least a couple more times before the end of the race and it got frustrating.  I was not strong enough to keep up with him or drop him, and yet when I passed him I felt like I had to try to hold him off, so I would push on.  Finally we turned out of the wind and he had a 200 meter or so lead on me when we rolled through Cannon City.  At this point I knew what waited ahead.  My co-worker Jim drew up the route for this race and he loaded up the last 15 miles with hills, and the last four hills are all big on their own, much less after 75 miles of riding and hills.  With about 8 miles to go the rider ahead of me pulled over and stopped again, so when I went by him I was determined to not let him catch up.  I pushed hard on the hills and geared up for the downhills to hold him at bay.

I looked back a couple times and saw him behind me, but he didn't look like he was closing, so I kept the pace high and just hoped he was hurting as much as I was.  I still had 100 meters or so on him when I made the last turn towards the finish.  The finish was on top of "Radar Hill" a minimum maintenance road with a slope over 15% at some points.  Right near the base of the hill there was someone cheering who said there was a rider behind me closing fast.  As I pushed up the hill there were some great cheerers, including Nate and Nichole in full cow suit attire, but I was struggling just to keep the pedals turning.  On a good day this climb takes about 3 minutes, so I just kept reminding myself how little was left after 5 1/2 hours of racing.  I took one glance behind me when I was about halfway up and the rider had closed the gap to about 3 meters.  What!?  How can he still be riding that strong?  My legs were on fire, I was in my lowest gear, and I just couldn't climb faster, so I kept cranking my way up and when the slope eased I shifted up and really stood on the pedals.  My legs were not happy at all, but I could see the finish line ahead and I was not going to get out-sprinted after this many hours of racing.  I managed to fend him off and just hold on to 10th place. 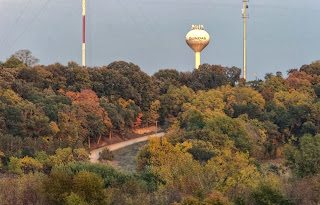 "Radar Hill" this one really hurt.

There is something really great about a tough race where you finish knowing you had nothing left.  When I crossed the finish line I could not have climbed one more hill.  I just stood bent over the handlebars for a couple minutes trying to catch my breath.  It was all I could do to pedal the mile downhill back into Northfield where there was hot soup waiting.  The race hurt, but the pain fades quickly and already I'm mostly only remembering what a great day it was to be out riding.
Posted by Craig at 4:38 PM No comments: