It has been a great day to be a nordic skier: 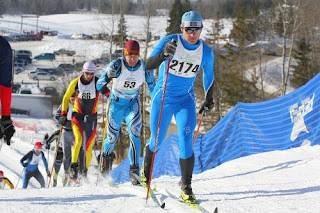 1. Minnesota Finlandia was this morning. The weather was amazing (I was skiing my cool down in a baseball cap with my sleeves rolled up) and the conditions were almost perfect.

2. The 25k pursuit race there served as the final race of the 7 part Minnesota Skinnyski Series. Our beloved Vakava Race Team was leading the team competition by 198 points heading into the race. We had 4 skiers in the race (meaning we could only max out at 400 points), so if Peter's Cheaters had sent a full squad of 6 skiers and had a perfect score (every skier winning their age group) they would have beaten us by just 2 points! The Cheaters did perfect score the race last year, so I was more than a bit worried, however they only had 5 skiers in the race and so Vakava has successfully taken down the Cheaters and won the team competition for the first time in 3 years!!!

3. I had a good race today myself, winning the pursuit for the 2nd year in a row. The race was a lot more fun than last year too (last year the field was a bit thinner and I soloed the whole dang race), since they wisely started the classic and pursuit skiers together this year, and this ment that there was a nice group of skiers for the classic portion of the race. This was nice, since I am not as strong of a classic skier, and I was able to hang out in the pack and get pulled around to the transition area and have plenty in my legs for the skate half of the race. The trophys for the Finlandia are the best of any ski race I have ever seen (well, I hear they give out some decent neckwear at those races in Vancouver) in the form of very intricate hand painted double-bladed lumberjack axes. Very cool, and worth the trip to Bemidji just for that. Vakava women took 1st and 2nd in the women's race too (nice job Mary Beth and Kathleen!)

4. There was a great battle at the front of the 50k race to watch, with Andy Liebner out sprinting Zack Simons and Andrew Johnson. I was telling somone after the race, "the 50k field was really tough. One guy was in the last Olympics, and one guy has one the Birkie." Of course then I had to say, "but neither of those guys won today". Big props to Liebner.

5. I got home just as the olympic men's 30k pursuit was taking off on TV. What an awesome race. It had the breakaway by Olsson, the team tactics of the other two Swedes (which made the race that much more compeling), and the amazing racing of the 4 Canadians (all in the top 16, including 3 of the top 9). The only thing that could hav possible made that race better would have been seeing some Americans a bit closer to the front. Kris Freeman looked to be havng a good race before his blood sugar and then his body crashed. Southam had a respectible race in 34th. Has anyone else noticed that of the 6 races so far, the top american in 4 of them (including all 3 men's races) has been somone not on the USST? Just saying.