(Finally) The End of the Racing Season

It's not often that you get to race - on real snow - at the end of May. It's also not that often that you get to race - at least at my level - against the likes of Ivan Babikov.
Last weekend I got both. The race is Ski to Sea, up in the northwest corner of Washington State. It's held every Memorial Day weekend, and my part was the first leg of a 7-leg, 8-person relay (XC, alpine skiing, running, road biking, canoeing, mountain biking, flat-water kayaking) that starts up at the Mount Baker ski area in the North Cascades and ends down in the saltwater of Puget Sound - ski to sea. The race claims roots going back to 1911 (it was in a much different form back then), but it's been a multi-sport relay now for almost 40 years. 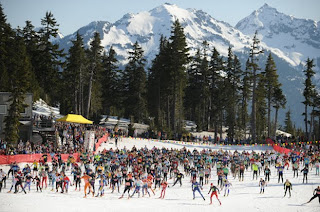 Start of Ski to Sea at Mt. Baker Ski Area in Washington
I hooked up with a team 15 years ago and have been flying out every year to help them try to win, originally, the masters division (40 and over) and, now, the veterans division (50 and over).
It's a pretty big race - 464 teams and 3712 competitions - and it attracts some pretty fast people. Yes, Babikov was there and, yes, he did win. But not by as much as you might expect. Babikov wasn't the only Olympian; in fact, out of the first 13 finishers (I was lucky enough to end up 12th), 6 of them competed in the Olympics at Vancouver, Torino, or Salt Lake City. CXC's Brian Gregg (check out his blog) had a terrific race - he was only 2nd this year, unlike in 2009 and 2008, but he managed to stay with one of the world's best hill climbers up one of the biggest and nastiest hills I ever compete on, pushing Babikov almost to the end of the race and finishing only 20-some seconds behind. 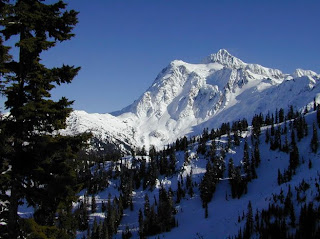 Not a bad setting for a ski race. (It's called the Mt. Baker Ski Area, but it's really at the base of the much more photogenic Mt. Shuksan.)
And, yes, there was plenty of snow - 140 inches still. (This place had a world-record 1140 inches in a single season a few years back.) It was pretty wet and sloppy, as you'd expect at this time of year, but that's what big structure and pure fluoros are for.
Of course, like in any race, the most fun part comes afterwards. We spent a couple of hours skiing around together on the last slushy snow of the season, the I wound my way down the mountain to Bellingham to watch our kayaker Shaun Koos (Torin's dad) finish up my team's last leg, then trade stories of our exploits, and start the mandatory partying. Brian Gregg, Martin Rosvall, me, Torin Koos, Kent Murdoch. (Martin was leading at 63 K's in this year's Swedish Vasaloppet; Kent is a friend of mine from Seattle who is a past Ski to Sea winner and who is still really fast.)
So, finally, the end of the ski-racing season, almost 2 1/2 months after the Twin Cites snow melted. (I'm sure I was one of the first guys out on roller skis, making sure I stayed in at least reasonable racing shape for this thing.) The rest of Vakava is a month into the new training year, gradually cranking things up. For me, it's time to kick back a bit. (And it's always kind of fun to run the rest of the team through their paces and make them sweat at our workouts during a period when I get to take it easy for a while.)
Dave Christopherson
Editors notes:
Here are the race results. Dave was the top "veteran" skier.
Posted by Nate at 11:09 AM