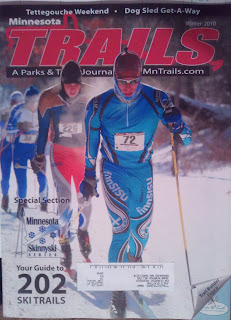 So I got a copy of MN Trails magazine in the mail, and I guess I can now add cover model to my resume. The magazine did have great coverage of last year's MN Skinnyski Series (including a word-for-word copy of Mary Beth's Iceland blog entry - even including my editor's note!). Their team competition coverage was especially entertaining. It went:
"The team competition proved to be, once again, a duel between Vakava/Sisu and Peter's Cheaters. This rivalry has grown to epic proportions and taken on its own mythology. It is a story of good against evil: on the side of good the wholesome and hard-working Vakava racing team, and on the side of evil the Cheater's, a heartless group of mercenaries - recruited by mastermind Peter Hansen - who wouldn't recognize each other on the street. Good triumphed in the end, but there were some interesting moments along the way. Vakava came out with guns blazing at the Twin Cities Championships and scored a whopping 586 points to 541 for the Cheaters. And it was the Skinnyski team also showing some firepower with 581. Boulder Lake saw the two favorites surge ahead with 590- and 572- point totals, respectively. The Cheaters snuck ahead at the Pepsi Challange. Then it was the Muven Gruven squad who made up some serious distance at the Nordic Spirit race. Muven Gruven was best at the City of Lakes Loppet, too. Were we going to see a new champion? It was not to be, as Vakava and Cheaters brought in the muscle for the Mora Vasaloppet. Vakava showed its might with a dominating 595-point performance - just five points shy of a perfect score. Still. in the Skinnyski Series, it's never over until the ax swings at the Minnesota Finlandia. The Cheaters were game and topped Vakava by over 100 points, but it was not enough. The skiers in blue came out on top."
Vakava/Sisu 3525
Peter's Cheaters 3431
Muven Gruven 3167
Skinnyski.com 2578
Hoigaard's/Breadsmith 1594
Nice recap. Couldn't have said it better myself!
Posted by Nate at 10:40 PM