Dear winter,
I miss you. Please come back.
Love,
Nate

Since the snow is not cooperating this year (dang did we get spoiled last year!), and all the races for citizen racers were cancelled, I figured that we needed to take things into our own hands and organize our own opportunity to go fast. So last Wednesday while sitting in my car in the pouring rain I called up Dave and proposed a time trial on the man-made snow of Elm Creek. Dave started spreading the word at practice that evening, an event was made on the Vakava facebook page (feel free to "like" us), and by Saturday morning we had a group of 40 to 50 skiers ready to knock the cobwebs off their racing muscles. This was made even more entertaining by Cheryl's idea to make the time trial an "ugly race suit" contest too.

When the start time rolled around everyone lined up and the race was on. I was lucky enough to have Bjorn Batdorf and Jon Miller show up, and the three of us soon formed a lead pack,and we traded off the lead every couple of kilometers. With about 1.5k to go in our 10k race I went to the lead to push the pace. The conditions were pretty soft and granular, and I figured if I could be in the lead going into the last uphill it would be hard to pass. This, in addition to a pretty ill-defined finish line, allowed me to just stay in front of a hard charging Bjorn. Jon came across another 5 or 10 seconds back. 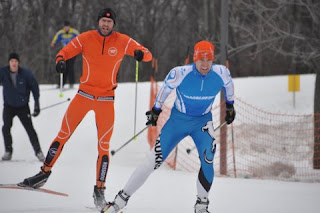 The sprint to the finish

My dad was kind enough to stand around freezing while we raced. While were were doing our laps he did have the park police come up to him.

"You holding a race here?"

"Did everyone line up and start at the same time and is it timed?"

"Did you charge money?"

"No, and anyone was welcome to join in"

I guess that was good enough for them, because they said ok and did not give us any more trouble, and my dad was able to write down a number of the finishers as they came across the line. As this was a self-timed event, many people also were able to find my dad or Dave after the race and get their results recorded, but the final "official" results found on skinnyski are still a bit thin - especially with finishers who were near the back of the race.

Most importantly, Cheryl and Dave Nelson were declared the winners of the ugly/retro suit contest by the crowd of people cheering on the race at the big uphill (led by Jon Millers mom). I think Cheryl knew that she had a "winning" ugly suit when she proposed the idea, but Angie's old FinnSisu race team warm ups could have given her a run for her money. 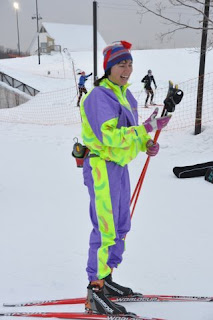 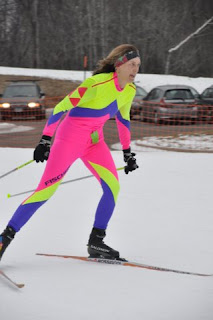 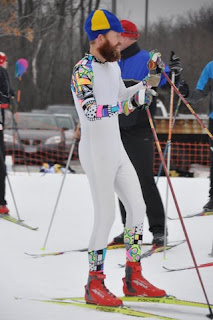