And just like that December is over.  Mother Nature decided to remind me that my excitement over natural snow was a whim she could take back and the month closed with a weekend of above freezing temps and rain, followed by some wet and heavy snows and wind.

Vakava did get out and make use of that natural snow while it lasted though with a handful of regular practices at Battle Creek.  The team also started a handful more races to close out 2019.

I'll give a run down of the team racing results as well as give my personal reports.

A bit earlier in the season than usual, Vakava was well represented at the Fulton Team night.  The team category results never got posted, but I know we walked away with a handful of the different category victories as well as the overall team victory.

The team is about as good as a herd of cats when it comes to rounding them up for pictures unfortunately.  So this is the best I've got. 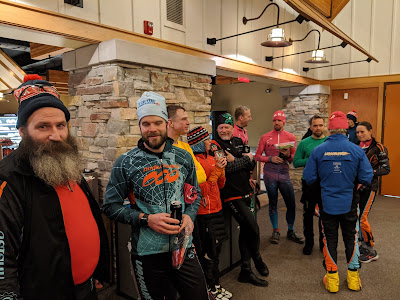 After a few year absence due to low snow, the Skinny Santa race was back and actually on the solstice this year.  Conditions were absolutely primo at Woodland Trails in Elk River for a double trip around the 10k loop.

I know Paul at a minimum was on the road to the race... and turned around when it was obvious the roads were an ice skating rink.  The same decision the race organizers made and cancelled the race.

With no Vakava practice on Wednesday as it was Christmas Day, and the normal Wednesday evening races at Elm Creek bumped back a day for the same reason, a couple of us decided to make it one of the hard workouts of the week.

Conditions were SCREAMING fast with a very hard trail.  Four skiers went under 11 minutes for two loops of the man made Valley Creek which is definitely the fastest results of the last two years.

My second race with the team and team pride was on the line!  Scott and I teamed up to do the Male-Male Classic-Classic division.  Yes, your math is correct, there were 9 divisions.  That said, we were both skiing both events.

5k skate first.  And for like the 3rd time in probably 15 of these Wednesday night races I've done over the last few years, we were doing the full lit loop of Valley Creek and Northern Lights.  I started on the front row with a good crew of Vakava skiers.  As we rounded the Whale Tail I was sitting somewhere around 8-10.  I'm not very good at holding my position in a dynamic pack and had gotten shuffled back on the trip down.  When we hit the wall I was able to slip to the outside and I was 4th or 5th at the top as we went double file up towards the parking lot.

As we passed under the bridge I saw Paul look over his shoulder and clearly decided it was time to break up the pack.  He surged, Andy went with him, and I slotted in behind Craig Stolen as the other two got a little gap.

Artie Huber came around either right before or right after Cowabunga and hung himself out in no-mans land between Paul and Andy and me and Craig.  As we rounded the far north end of the loop Erik and Laslo Alberti decided it was time to move up.  After the race Erik said he felt like he wasn't working hard enough at that point.  That started to break things up and string us out.  A little further up the hard packed and somewhat uneven course took its toll on Artie and he barely saved himself from skiing off into the woods and fell back.

With probably 3/4 of a km to go, Abe went by me, then Craig, then Laslo, then Erik finishing in a flurry.  I was definitely feeling gassed at the end so I'm not sure if everyone else turned it up a bit or if I faded.  Overall I was pretty happy with my race though finishing 7th in a pretty strong field.

Originally I had planned to actually use classic skis with kick wax for the classic race.  Dave "convinced" me that I should just double pole it like most of the other guys were doing.  Again, we did the full lit loop which may have been a first for me in the classic race.

It was a fun start falling into a train of Vakava on the front of the race around the Whale Tail with Abe, Erik, Scott and myself towing the rest of the field.

Somewhat of a surprise to me, I was actually making the best time on the steep uphills.  The Wall and Cowabunga were particularly good for me.  Where I had more trouble was keeping pace on the flats and gradual stuff.

Artie and Jonathon Sanborn were able to pull away from me on Northern Lights and I ended up soloing in for 5th.  Again, pretty pleased with how the race went.

My first time skiing at Woodland Trails in a couple of years.  I had a vague memory of the trails, but I didn't really get to see them and get a solid reminder until in the race.  Hoping for another solid result to start the season I went out hot hanging with Artie Huber, Ben Creagh, and Josh Doebbert.  By the time we hit Top of the World I was already feeling worked.  Ben and Artie made a move and took off, while I stuck behind Josh for another k or two.

After gliding up alongside Josh on a downhill I took the lead on the next uphill.  My legs were definitely feeling "loaded", and I just felt like I had poor balance and drive.  This resulted in pulling a 180 right in the middle of the trail on a sharp downhill corner a ways up the trail.  Thankfully I was skiing all alone at that point and no one came barreling around the corner into me.  It took a bit of the fight out of me mentally for a bit though.

As I was lapping through the start/finish I could see that Josh wasn't that far behind me and Jon Sanborn not too far behind him.  I figured with the way I felt they would eventually catch me, but I resolved myself to not make it easy.  I made it to Top of the World again without them catching me.  And suddenly felt better?

I'm not sure what the deal was exactly, but my legs felt less on fire and I felt like I had some balance back and was actually crunching and driving instead of just floundering between my skis.  I started amping the effort up thinking I could get away from Josh and company.  I'd glance back occasionally and Josh would still be there, maybe closing slightly, but maybe not.

I was pretty pleased that I was able to really put the effort in over the last 6 or 7 km.

Last year the Wednesday night races made up a consistent portion of my intensity training.  Since we didn't have Vakava this week I decided to fall back to last year's schedule and do both the skate race and classic race.

The skate deck was almost a sheet of ice.  I think most people were finding a hard time getting an edge.  For some reason my skis were actually doing quite well so I was expecting a blazing fast race for two loops around the man made.  With a small field just about everyone was on the start line.  We took off and just about flew all the way down to the Whale Tale.  I was slotted somewhere around 6th or 7th I think.

Enjoying the climb up the wall as I usually do I jump skated a few spots ahead and fell in behind Paul for 5th.  As we descended into the Donut, Paul was letting a gap open up to the trio of whippersnappers ahead of us.  I was feeling comfortable getting a draft at ripping along at 2:15/km on the hard pack so I didn't want to lose the group in front of us.  I made a move and pushed up the hill to the parking lot just catching on as we went below the bridge.

I made it to about the bridge the second lap before the youngins dropped it down another gear I didn't quite have and I ended up tailing in at 10:58 for fourth place.  I beat a handful of pretty fast guys so I'm happy with that.  Helps to be able to stand on your skis.  Maybe the Birkie can be just like that... on second thought, I hope not.  Those downhills would be frightening with the skate deck that hard.

Super short classic race report.  I double poled.  I almost held on for one lap, then the four guys who beat me pulled away 30 seconds on the second lap.

Where To Find Vakava Next

Coming up in the first few weekends of January you'll spot a few folks at the First Chance Race and/or the Pre-Loppet, a larger contingent at the Rennet, and then a solid crew up at Seeley Hills.
Posted by Ben M at 8:00 AM