To offset Elspeth's discussion of the Screaming Barfies (a term I am thankfully unfamiliar with!) I will share a recent story of challenges with being too hot instead of too cold. 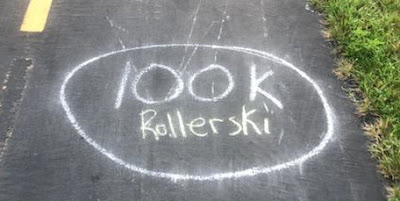 I've been known to do some endurance activities that even my other endurance athlete friends think is too crazy (TI V13, TIV14, Marji Gesick, etc).  Thankfully I have friends who are equally not quite right in the head and we can encourage each other to do these sorts of things.  Enter Artie and his proposal for a 100k roller ski this summer.

During a nice long Saturday morning ski in Afton, Artie talked about how he was planning to do this short little ski.  He had a route all planned out, a mid-way rest stop to refuel, etc.  It took me about 5k more of skiing to decide I wanted in.

After missing the first proposed date due to a minor injury scare we settled on making a go of it on Friday July 3rd.  As the date approached we were watching the weather.  Thankfully the prospects of storms appeared to be holding off.  Unfortunately we were still in the pre-storm sultry hot and humid conditions.  We planned a nice 5am departure to try to beat the heat.

The evening before I got everything all set.  Stocked a cooler with plenty of snack foods, appropriate recovery beverages, etc.  Swapped out my normal 2/3 combination of wheels on my Pursuits for a 2/2 combination.  100k seemed like plenty far I didn't need a little extra training resistance.  Seeing as I had a 45 minute drive to the start I set my alarm for something dumb like 3:30am.  I then promptly tried to sleep through what felt like pre-race anxiety of oversleeping and missing the start.

It wasn't too long and the alarm was going off and I was sipping coffee grabbing my goodies from the fridge and heading for the door.


We arrived at John's house at 4:45 ready for a long day.  John lives right off of the trails at Elm Creek and his place would serve as a nice launching off point, mid-event refuel stop, and a nice post event recovery.  John was going to join us for the first 40-50k and then switch over to a bike and trailer during the second half to keep us fueled.


Dave B was our other companion for the first half of the adventure.  Shortly after 5am the four of us rolled out from John's to make our first partial circuit of Elm Creek.  Artie's route had us covering all of the trails in Elm Creek going each direction and then a pair of out and back trips to the Coon Rapids Dam.  It made for a great route since the only repeat section was the trip to the dam.


Right off the bat things were pretty warm.  It wasn't hot yet, but the humidity was high.  The mist hanging in the air as the sun rose was beautiful but I was already sweating despite a super easy pace.  We rolled along comfortably chatting about how we had a long day ahead but we felt great and were just coasting.


Rolling back to Elm Creek to complete our first circuits we met up with Dave C, Bonnie, and Mark who started at a more rational hour of 7:30 and were going to join us for a while.


At just shy of 4 hours we rolled back into John's at 55k for a quick break to refuel.  I changed socks and boots, shoveled about half a loaf of garlic bread in along with a stack of Chewy Chipsahoy cookies.  I also took a couple of enduralyte electrolyte pills and a bunch of water.

About 18 minutes later we were back on the trails again to knock out another 45k.  How hard could that be?

Dave B joined us for just a bit longer before turning back and calling it a day.  I think he skied about 68k on the day.  Then we were onto the long very gradual downhill roll to the dam again.  I found myself on the back of the train and then yo-yoing off the back as my effort was going sky high trying to hang on.  My HR was climbing out of the L1, this is easy, I could do this all day, very quickly into no mans land, I'm not sure I can do this for a few more hours territory.

It was definitely getting warmer too and the sun was coming out.  I'm guessing it was upper 80's by this time and the humidity was still high.  I was definitely quietly sitting in my own little cave of misery at the back.  I've done enough of these to know signs.  When this happens people either find their way out of the bad patch, or the disappear and drop out.  Only time would tell what was going to happen to me.

After a short stop to refill our already empty water at the dam we turned around to head back towards Elm Creek.  The stretch back to Elm Creek is just a long false flat uphill.  The group had me lead to help set the pace instead of being the anchor.  Despite trying to set my own pace I just could not get my heart rate to come back down.

Just a few km shy of Elm Creek, St. John came rolling the other way down the trail with is trailer full of goodies.  We took another short break to refuel and try to work out some cramps that were beginning to plague Artie.


Artie had stocked the trailer with a gallon of Arnie Palmer.  That surgary nectar was a good pick me up.  This would be the inflection point of the ski.  Artie was just beginning to feel the effects of the heat and was starting the process of having various areas of his body cramp up.  Unknown to me just yet, but this is where I started to climb back out of the pain cave.


After a 10 minutes stop we decided we better get moving again or the last 20k would not just magically finish themselves.


We dropped Dave, Mark, and Bonnie back off at the chalet and Artie and I pressed on with St. John and his trailer in tow for the final 14k outer loop of Elm Creek.  Bonnie, Mark, and Dave C all did 55.5k.  Dave was adamant we not leave off that half a km.

Artie was starting to come apart at this point.  First a leg would cramp.  Then the shoulder blades.  Then the triceps.  He gamely kept skiing on but he was all on will power at this point.

I wouldn't say that I felt good, but I didn't feel bad either.  Hot and tired, but no cramps or the nausea I've come to expect with these really hot events.  We just kept plodding along, inching ever so close to the finish.  The final little climbs on the north east side of the park felt like Bitch Hill.  But finally we were over the last one and it was pretty much all downhill to the finish.

At the end I had 101.2km and 7 hours and 47 minutes elapsed time, 7 hours exactly moving time.  High temp on the day was recorded as 90F about an hour after we finished.

We grabbed some chairs and tried to cool off in the shade of John's garage.  Without going into too many details, Artie gave me a bit of a scare as the heat really hit him hard.  We got him inside finally and then the cramps hit him hard!  To pair with Elspeth's Screaming Barfies, we can call this the Screaming Crampies.

Things finally settled down though and apparently it wasn't so bad, Artie is talking about giving it another go in September as there are a few other crazies who think 100k roller ski sounds like fun.  And to answer anyone's questions of why you might want to join us, in the immortal words of George Mallory, "because it's there".