I haven't been pulling my weight of blog posts around here.  Elspeth has been holding down the fort all by herself lately.  I started writing one, thought about writing a race report once racing finally started again, but I just wasn't into the story.  My last post was about the July 100k roller ski.  Based on that last post and this one, it looks like my inspiration lately is stupid ideas.

No need for me to tell you that the last year has been anything but normal.  When racing did get started some of the normalcy almost returned.  I did the Pre-Loppet, Skinny Santa, and Seeley hills.  I was racing OK, but not great.  At that point I was still planning on skiing the in person Birkie and even though it wasn't going to "count" (count being defined as qualifying for the Elite Wave like any respectable wave one skier dreams of).  Then the cold snap hit, races got cancelled or pushed back, I had a few really rough practices, and then Mora was anything but encouraging.

I'm realizing more and more that I ski for the social aspect more than the competition.  Sure I still want to do well and I'll put in the work solo if I have to, but I really like the social scene that comes with the training and racing.

So the thought of driving up to Cable early in the morning on Saturday, racing in a race that doesn't count, maybe well, maybe poorly, and then getting back in my car and driving straight back home without getting to hang out with all of my ski friends was just depressing.

Time for a new plan.

Just because I wasn't feeling the urge to go fast and hard didn't mean I didn't want to challenge myself.  I tossed around a pair of ideas.  The first and discarded idea was to ski a skate and classic Birkie on the same day.  The full 50km and 55km versions too, because of course.
The idea was good, but it wasn't quite right.  Plan two... I had friends skiing a Birkie every day from Wednesday to Sunday.  Maybe I should ski one each day as well.  5 marathons in 5 days?  We can probably scale that down to just the stated virtual distance of 43km each day.
So Tuesday I committed myself to my plan.  I did the super easy "Switch to Virtual" option that the Birkie has been pushing for quite a while now.  3 minutes and I was no longer going to be allowed on the course on Saturday.  I let work know I was going to blow out of the office early Wed-Fri and I sent an email to the Vakava crew stating my intentions publicly to have some accountability (funny side story, Dave thought my email said that each of the dates/times/locations I stated were options, not plans, and he was going to send me a smart ass email that I should ski each of them... jokes on you Dave!)

My wife had the day off of work too so I lined her up to go ski part of my first Virtual Birkie.  My original plan was to get to the Trailhead at Theodore Wirth about an hour ahead of her to get in some extra distance before she showed up.  She ruined those plans though and got there ahead of me.
So about noon on Wednesday, with the sun blazing, a fresh half inch of snow on the ground, and temps pushing 40, we set out south from the Trailhead to ski the natural snow trails and lakes.
I didn't get too far before I decided that a trailside wardrobe change was required as I was WAY overdressed. 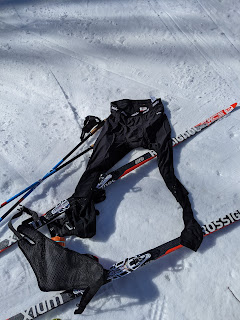 Somewhat surprisingly the snow in the direct sunshine was significantly faster than the snow in the woods.  I did a few extra excursions to get some extra distance.  When we were apart I elevated the effort to race pace.  Otherwise it was mostly easy cruising.
When we got to the lakes things were a bit soft, but quite a bit faster.  We saw quite a few people out enjoying the sun shiny afternoon.  The kite skiers on Bde Maka Ska were quite fun to watch. 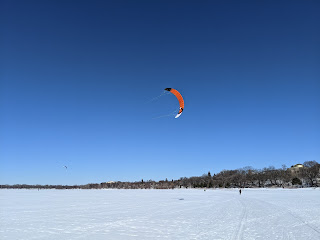 When we got back to the start of the Skyline trail I had about 6 km to go and she was at her longest ski of the year.  So she peeled off for the car while I skied Skyline and then took the Bridge Trail up to Trail 18.  Except Trail 18 was being turned into some type of ski cross course with big jumps and berms.  Seeing as I was 3:20 into a pretty sloggy ski I decided NOT to hit the sweet jumps. 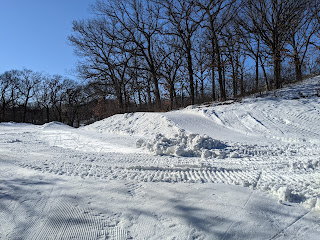 I navigated around the new skills course and did a short lap of the roundabout back up to Coaches Corner and then finished perfectly on the finish line in the stadium.
Virtual Birkie # 1 complete.  43km - 3:32:22 - 1,404' elevation gain 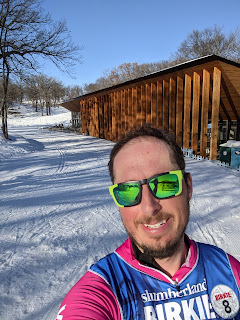 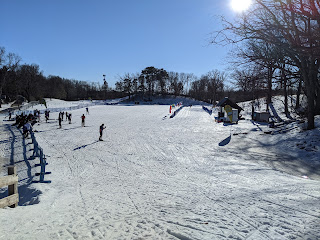 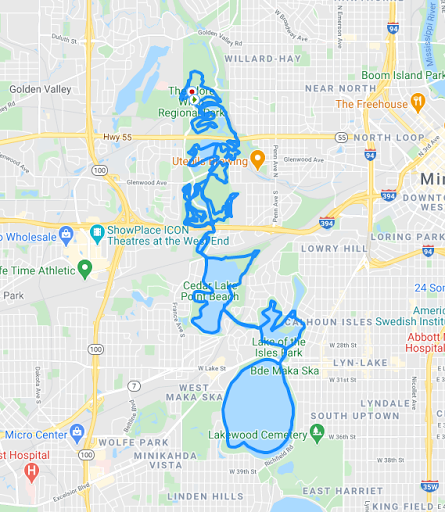 <Insert total fail to take a picture with my wife>

COVID times means that I'm Uber dad on the hybrid days my kids have school.  So after dropping my spawn off at home it was off to Balsam Branch near Amery for my second go around.  Another 40ish degree day and a 3:30 pm start.  They also hadn't groomed and had about an inch of marshmallowy snow that was just dog slow.  I even cheated and flouro-doped for the day and was not in love with my skis.
Remember how I said I ski for the social aspects?  Yeah, not today.  I shared the entire trail system with one other person the entire time I was there.
Balsam Branch is one of my evening go to spots to ski because it is the closest place to my house that is lit.  So I actually rarely get to ski there during the day so the outer loops that aren't lit are my least skied trails.  The entire trail system is bi-directional and has quite a few different intersecting loops and cut-offs.  One of the things I like to do when skiing there is play "paint the trails" where I be sure to cover all of the trails in both directions.  I was able to get about 10km of trail in before having to skin on the same trail twice even independent of direction.  But skiing everything both directions it feels like there is close to 30km of unique trail.
Again the sun was shining and the woods were beautiful.  As it got to golden hour it was spectacular. 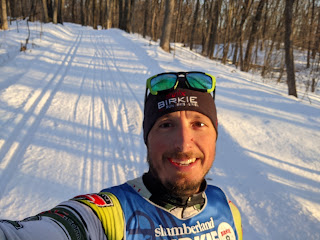 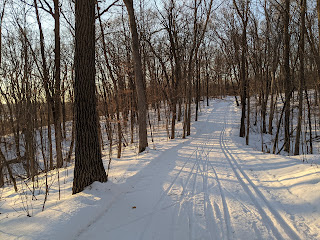 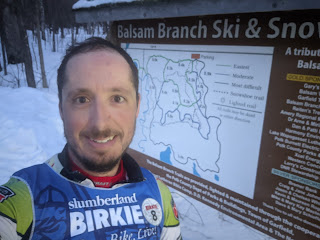 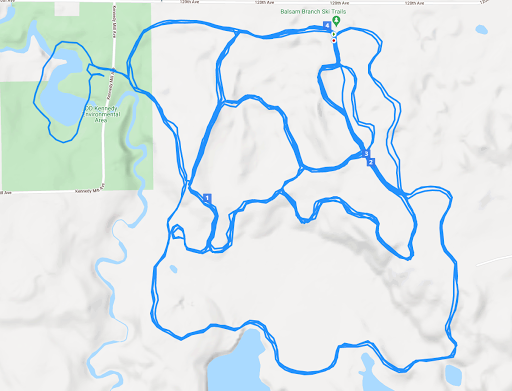 A 1:00pm work meeting meant that I again didn't start until almost 3:00pm.  Another 40+ degree day and the trails were SLOPPY.  My wife works near Hyland so I talked her into skiing with me for a bit again.  This time I was successful in getting there before her and got a few km before meeting up with her.  I also saw Craig out coaching his high school team at the conference ski meet.
The sun and warm temps meant the natural snow trails were taking a beating.  Bare patches of wood chips, standing water on the trail, running water on the trail...  it had me thinking about trading my skis for one of the pedal boats for a hot minute. 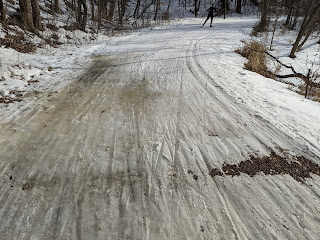 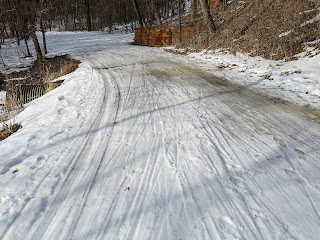 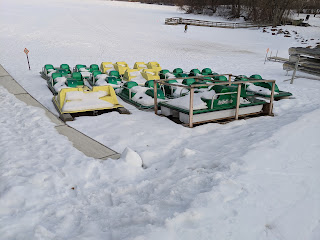 It was also pretty nice up by the Nature Center as golden hour hit again. 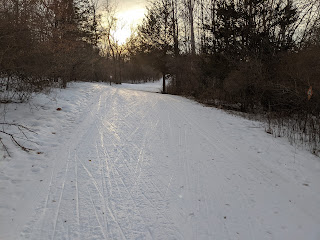 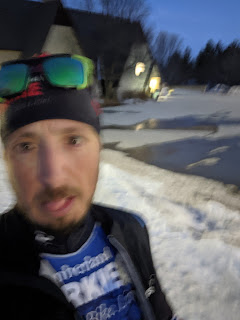 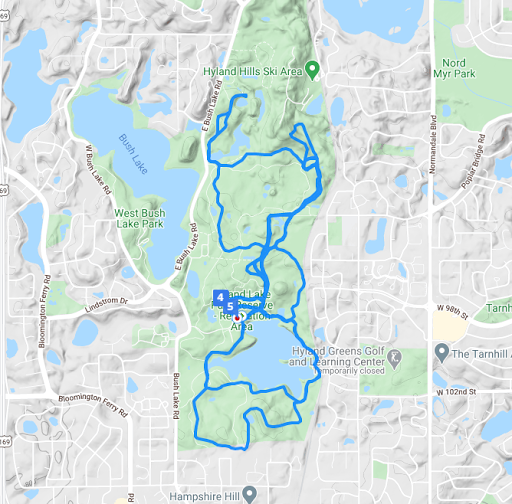 THIS was the day I was looking forward to.  A bunch of my fellow Vakava skiers were going to get together to ski their virtual Birkie.  Mary Beth took the reigns of organizing and it was AMAZING.
After another warm night that William O'Brien wasn't able to groom the call was made to switch venues to Mora.  The folks at Mora rolled out the red carpet for us and not only were the trails perfect, so was the weather, and the post race amenities.
I think we had 10 of us, my ability to count is starting to get weak at this point.  With overnight temps around 25, some morning fog and clouds obscuring the sun, the trails were really fast (well compared to anything I had skied on yet this week anyhow) until about 11:00am when the sun came out.  My wife jokingly suggested that maybe a double Birkie was in order.  Before the sun came out that didn't seem too crazy.  Claire would have been game I'm sure. 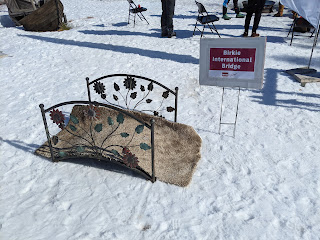 But then the sun came out, the trail side fire and food was set out, and it was definitely time to stop.  But not until my wife who had no intention of finishing a virtual Birkie when she started got to 43km.  So even though Claire and I were done, we skied out the rest with her.  Then we were so close to 50km we figured we should finish that.  And it was a little bit to spite Dave who was trying to give me a hard time that everyone skiing the real Birkie was doing 45km so my virtual ones weren't going to count.  They'll count the 50km one Dave! 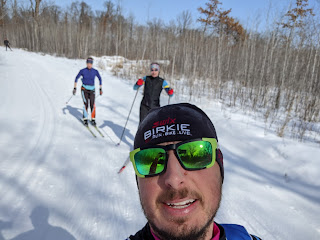 The post "race" party was exactly what I needed.  Lots of food, recovery beverages, perfect weather, and lots of ski friends.  Thanks for organizing MB!  The highlight of my season. 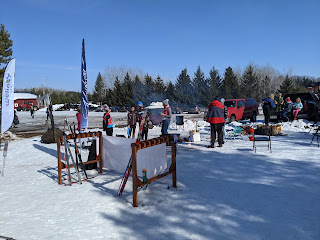 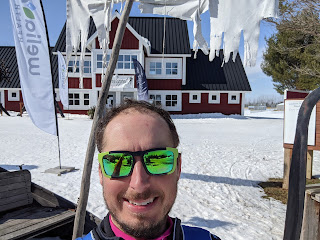 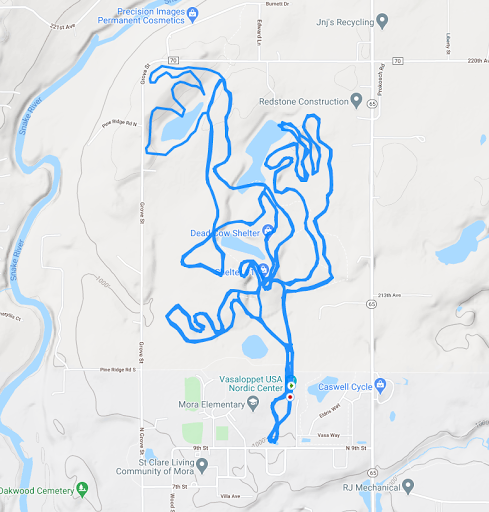 So the pictures from the actual Birkie make that look significantly harder than what I did.  But it was still hard.  The only thing Clair will turn down going skiing for is homework, and then only maybe.  So I was super thankful to meet her at the Trailhead again at 8:30 Sunday morning.  There was about an inch of snow on the ground and it was falling fast.  With temps right around 32, the snow was simply covering the slush underneath. 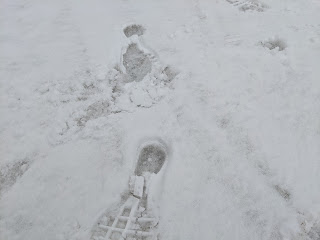 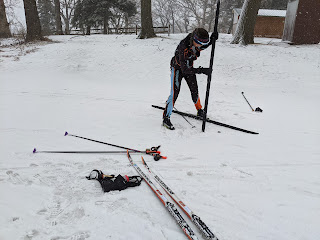 8km in one hour back at the stadium and I wasn't going to be able to slog that out for another 4.5 hours.  So back to the car for the skins.  My wife graciously let Claire borrow her skins and off we went again.
I lost a little track of time but it eventually changed from blowing snow, to just overcast, to eventually blazing sun again.  When we arrived there was still parking in the little parking lot by the Trailhead.  Later the place was a mad house and the trails were seeing some good traffic.  The tracks started glazing a bit instead of just being fresh snow smashed into slush and it started speeding up again.  In some of the areas.  We were still basically striding down the North Finger and La Squadra. 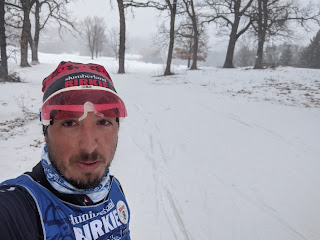 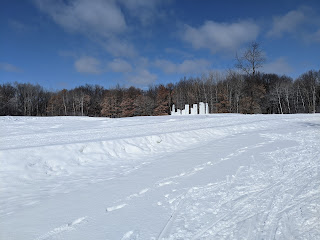 42.05km and we were back in the stadium.  We went out to the Green Meadow cut-off and came back to the roundabout to realize we still needed a little more distance so around the roundabout we went a few times.  Then it was down the finishing straight to finish at the base of the bridge.
Virtual Birkie # 5 complete.  43km - 4:20:37 - 3366' elevation gain 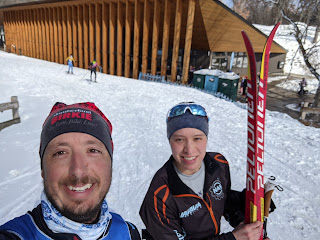 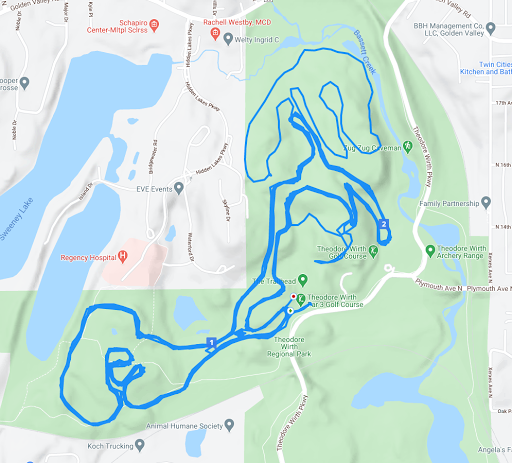 That should be a memorable, one of a kind Birkie.  I think I'll take a rest day now.  Maybe two.
When first conceived, this idea sounded a little dumb and mildly challenging.  I had not accounted for the warm weather and slow snow.  It turned out to be quite the undertaking and there were a few times where the public statement that I was doing it was one of the primary things keeping me going.
I'm looking forward to life continuing to return to more normalcy in the next year.  February 26, 2022 I hope to take my next shot at qualifying for the coveted Elite Wave.
Cumulative 222.4km - 17:45:27 - 11399' elevation gain
Posted by Ben M at 8:00 AM