To quote Monty Python, "I am not dead yet". 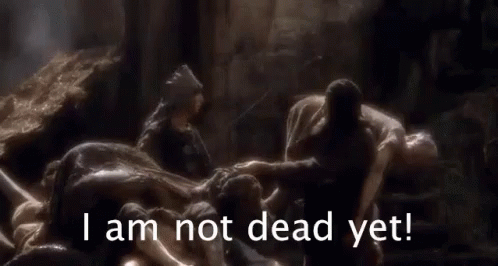 I certainly haven't been doing my share of the posting to the Vakava blog in the past year though.  After my Ground Hog's Day Birkie I suffered a little burn-out (who knew 5 marathons in 5 days would do that to a person?).  And then we got a wild hair to move and I pretty abruptly stopped nearly all forms of physical fitness to first get a house ready to sell, then pack, then move.  This resulted in a couple of the smallest training months in the past 10 years.

Cool.  June I decided to get back on the horse.  That lasted a whole week until I crashed on my first roller ski of the year and spent a week and a half thinking I had torn my hip flexor.  Turns out I hadn't, just sheared a bunch of blood vessels and had the most wicked bruise.  It grew and changed over three weeks eventually spreading all the way down my inner thigh, across the top of my knee, and then started back up the outside of my thigh.  Super cool. Neat.  Back on the horse again.  Mid July I joined Artie for his now annual 100k roller ski.  I wasn't nearly as fit as I was the year before, but the weather was nicer, and I'm no less stubborn (some may call it stupid, but I don't listen to them) so we got it done. 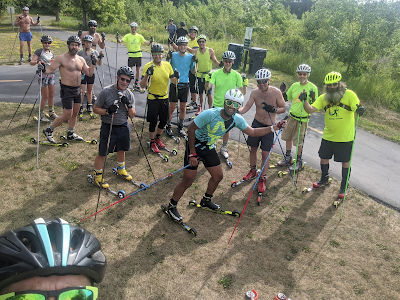 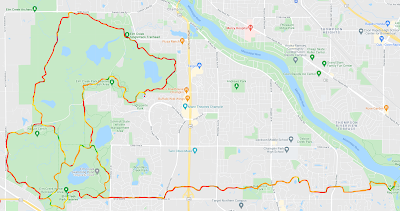 We then hosted the Lindström Bakgård Ultra in July.  This was a slightly modified version of a Backyard Ultra where once an hour, on the hour, you take off for a 4 mile loop.  You keep repeating that until everyone quits.  In case I don't ever post anything more about it like I should... Craig won with 7 laps for 28 miles. 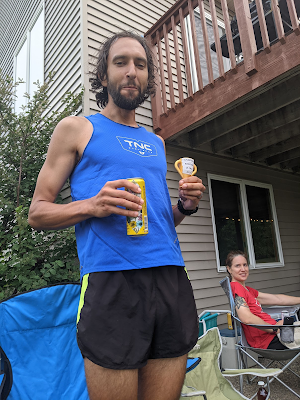 August I then rode my bicycle across the state of Minnesota on mostly gravel roads in 17 hours and change.  Did I mention my stubbornness?  Because I certainly wasn't trained for sitting on a bike seat that long.  The scenery certainly didn't suck. 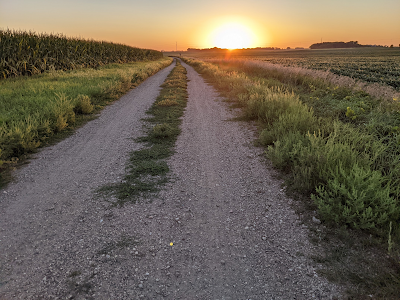 Ok Ok.  Fall is coming, I'm starting to find some fitness.  Queue a mountain bike crash with my kids that sprained my thumb pretty good.  Its fine, its fine.  I can ride the trainer, run, and skiing is only uncomfortable.  Queue... I still don't know what.  Some sort of tendon issue in my foot.  I went from fine on Friday, to crawling (literally) to the garage on Monday morning to find the crutches.  I couldn't even put a sock on it hurt so bad.  It took a few weeks before that got back to being able to do anything on it.  That set me back pretty good right as ski training was ramping up.
All of that as a super long and rambling pre-amble to RACE SEASON 2021/2022.
Well actually, just 2022.  I didn't race any of the early season races.
Noquemanon 50k Skate
I love the Marquette area and will take just about any reason to head up there and enjoy everything they have to offer.  This year I was able to double dip and headed up for the Noquemanon and was also able to sneak in a Polar Roll virtual event on Sunday.
Other than the 100k roller ski, I don't think I've skied 50k at any time over the summer or fall, so jumping straight to a 50k race sounded a little intimidating.  But it is net downhill so it'll be fine...
We started out with the parade lap around Al Quaal before busting out into the wilderness to work our way down to Marquette.  My early goal was to not go out to hard (like I do in EVERY RACE).  Teammate Laura caught up to me about 4k into the race.  She was moving quickly and I was pretty sure I was going to just let her go.  But with a couple of downhills sprinkled in, and her getting hung up behind a few guys I ended up in a small pack with her.
That pack eventually grew to a train of probably 20 guys that she pulled along for probably 10k.  I eventually took a turn on the front for a little bit before some young guy came hauling through much faster.  Again, I was going to let him go, but then there was a downhill and my skis were running pretty dang good (thanks Finn Sisu!) and I ended up right on him again.  So I then made a mistake and pushed harder than I should have to stick with him.
We crossed the Dead River Basin and started the long climb to the course high point.  Laura was either on the front here or very near the front.  She skis uphill very quickly.  Just before the top of the hill I thought I was in trouble.  My HR was 95% of max (maybe 97% of a max HR I've seen in the last two years as age may be catching up with my actual max HR).  I was hoping that my good skis were going to carry me over the top and on the next couple of km of mostly downhill I would be able to tuck into a group and recover.  Never happened.  I blew up pretty spectacularly.
Despite being net downhill from there, it was still a long ways to Marquette.  I was really glad to ski up to the dome at NMU and just walk inside since this was my first Noquemanon that actually finished at the dome.

Polar Roll EX 30
Don't tell anyone I posted about a fat bike event on the Vakava blog.  I might get kicked off the team.
But seriously, I've wanted to do this race for quite a few years.  But it is typically right around the Birkie so it is never going to happen.  But they have embraced the EX (enhanced experience) format with COVID.  Basically a virtual version, but you better believe that it is not a cake walk.  My ride was 38 miles on the Sunday after the Noque and that enhanced it enough for me despite the trails being in fabulous shape.  Don't get me wrong, I love skiing, but riding some sweet groomed single track doesn't suck either.  And I'm now just one event shy of the Triple Crown.  Which is a club for stupid people... I mean stubborn people who do stupid stuff on bikes... I mean awesome feats of endurance. 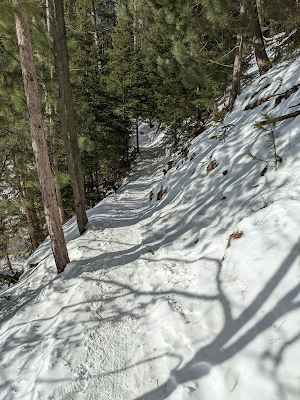 Marine O'Brien 50k Classic
I  was convinced I was going to do Seeley Classic again this year.  I dread, but enjoy classic racing.  I hadn't signed up yet though and then I saw that the MOB race was going to have a special edition 50k classic race for their 50th anniversary.  And to boot, it was going to be a real adventure with multiple non-snow covered road crossings, a trip through a portion of the park not normally groomed for skiing and then down into Jackson Meadow and back.  FUN!!

Early on I thought maybe I was back in high school since I skied with both Andy and Matt in high school.
Anyway, the event turned out to be a hoot.  My parents came out to be my personal photographers and grabbed some super cool pictures. 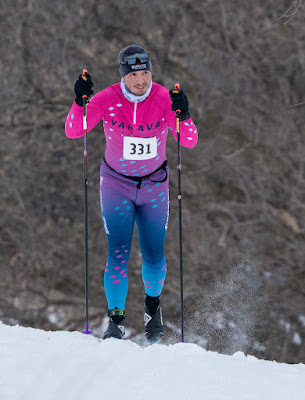 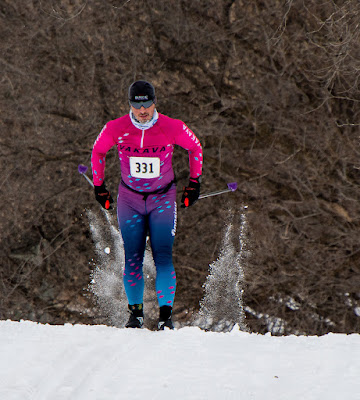 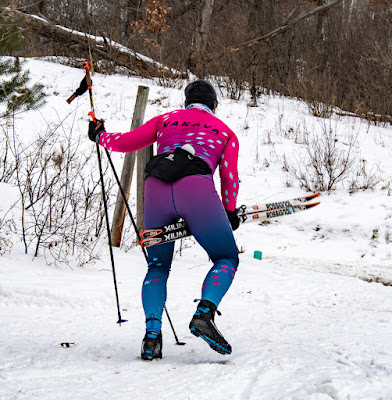 Well, mostly sweet shots of me.  That last one was at the 9th of 10 road crossings.  Apparently I was hoping to hop on my broom and fly across?  I was bonking reasonably hard at that point so I wasn't particularly graceful. 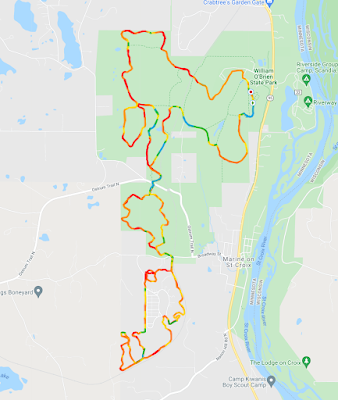 In the end it wasn't necessarily a great race for me, but it was a total blast to be a part of and a fun adventure.  10/10, would recommend.
Mora Loppet 20k
I couldn't bring myself to want to participate in the City of Lakes this year.  After confirming I had made it through my latest COVID exposure uninfected late in the week I decided to hop into the Mora Loppet 20k.
I was looking forward to getting a solid workout in and ski on the Mora trails the week before the Vasaloppet.  The morning turned out to be COLD and WINDY.  There was an inch of fluff on top of some really firm trails.  The trails looked fantastic ahead of the Vasaloppet so I was psched about that.
I decided I wanted to try a novel racing tactic this time. I have told my friends I call it, "not going out too hard in the first 1/3 and blowing up and suffering for the next 1/3, and then either recovering a bit in the last 1/3 or completely dieing"
I started, let the lead pack blast away, let one or two more people go that I may have previously tried to hang on to, and then settled in with another skier.  At times I though to myself, I could probably be going faster, but chose to just bide my time in the draft, focusing on skiing balanced and in control.  The lead switched a few times in the first lap and I did take my turn nearing the end of the first lap.  But I very deliberately took the pull while we were still in the woods and then eased off on the last climb to let someone else take the lead out into the south headwind and the fields.
At the start of the second lap, our little group of what must have been 6 or 7 got blown to bits when Maggie Bowman went to the front.  I dug deep and was able to catch on as was one more person.  We skied as a trio for maybe 5k before I became unhitched from the back of the group.  They managed to put about 30 seconds into me in the last 5k.  But it was nice that they pulled away, not that I died.

Pretty neat HR graph that doesn't go straight to max and then fade away part way through the race.
Mora Vasaloppet - Dala 34k
To Be Continued...
Posted by Ben M at 9:16 PM