After a challenging season on many levels, culminating in my father’s death from cancer just a few weeks before leaving for Iceland, I was more than ready for a nice, stress free trip with my 11 year old son, Will. Initially it appeared that the worst of the Eyafjallajokull volcano had passed, after it closed down a majority of the European airports for an unprecedented 6 days. But the week before departure, like many good volcanos do, it began spewing again. This time, instead of closing European airspace, the Reykjavik airport closed for several days. As we watched very closely, it became clear that there was no way of knowing if we would be able to land in Reykjavik, as opposed to landing in the remote Akureyri with a stopover in Scotland, until we were actually in transit. Not exactly what I was hoping for. It all depended on which direction the wind was blowing. I contacted Icelandic Air the morning of our departure and they were still uncertain if we would be able to land in Reykjavik. It wasn't until we arrived in Boston that we learned that we would be the first flight in many days to be allowed to land. We had a similar situation when we departed. The winds gods were definitely with us on our traveling days. We weren't so lucky, however, on race day. 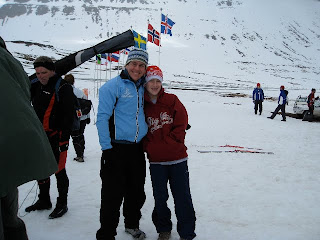 The day before the race was amazing; minimal wind, sunny and temps just above freezing. A perfect Klister day, or so I was told. Since I've only used Klister three times now, I didn't really feel qualified to make this call myself. Race day was supposed to be more of the same. I remember asking the locals about the weather prediction several times. It was supposed to be even nicer on race day. When we woke up race day, it was warm and calm. By the time Scott Ellertson, my other travel mate, and I made it up to the start of the race, the wind had picked up dramatically and it was cold. As we tried the recommended multigrade Klister out, it didn't take but a few strides to tell it wasn't going to work. Most of the skiers around us were struggling with what to do as well. Scott ended up with a couple layers of VR 50-65 over his Klister and I ended up with one. Nobody around us really seemed to be having great success and we definitely didn't know what would work. We found out after the race that scraping the Klister off and using a product called Ski Go was the application of choice.

At the start of the race I was still optimistic. The first several K are flat and slightly downhill. My skis were sticking a bit, but not more than the others around me. It wasn't until we began to climb that I realized it was going to be a long and brutal race. I can honestly say it was the most difficult race I've ever done. We had very diverse conditions including some falling new, dry snow along with very strong wind. There were gusts between 30-40 mph. I remember forcing my myself to push back into the wind at times or be blown over. I skied about 85% of the race out of the tracks because they were either nonexistent, had snow in them or were just very slow. I kept telling myself to keep my feet moving. I have also never experienced such significant icing 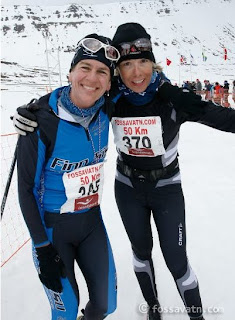 on my skis before either. The Swiss men that I was skiing with at the time showed me how to try to reduce this icing, but I struggled to do so. On the last long uphill, I was passed by Stella, the top Icelandic skier and a friend. I have gotten to know her from the two years she has come over to ski in the COLL and a previous Fossavatn race. I was so relieved to make it up the hill. I quickly passed Stella at the top on a flatter section. The last 6-7 K are all downhill. I was exhausted from my duck walk up the hills, but I embraced the potential for an extended, quad killing tuck position. Anything other than the nasty slipping I had endured the previous 43K. I tried to visualize my teammate Angie, who has amazing and graceful downhill technique, during my quest to the finish. The downhill section included dodging many slower skiers from the shorter races and maneuvering through the sloppy, slushy snow that occurs at lower 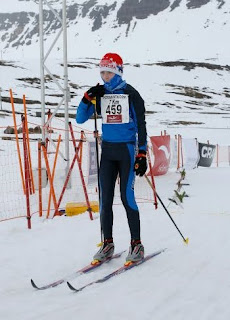 elevations. I was really happy to make it down without falling! After finishing, I quickly found my son who had participated in the 7K race. He had a great time, but he tried to convince me that I had made the wrong choice to only bring waxless skis for him. I just laughed and looked for my post race bag with chocolate in it. Later in the afternoon, was the famous cake buffet which consists of many tables of the most amazing deserts that you have ever seen. Then there is also a talent show, which was hilarious. This is where skiers, and their family and friends, have an opportunity to perform for the group. Then the soup buffet in the evening, followed by more music, dancing and drinking late into the evening. Icelanders sure know how to let loose and have a good time.

Although getting to and from Iceland and the race were difficult. I didn't travel to Iceland just to race. I really went to explore the beauty of the country and its people with my son. Our trip was truly amazing. My son and I were hosted by Margaret Gunnarsdottir, Jon Sigurpalsson and their daughter, Rannevig Jonsson. Why so many last names? An Icelander's last name consists of the father's first name followed by daughter (dottir) or son, depending on gender. This is the second time I've stayed with the family. They have a way of welcoming you into their home and by the time you leave, you think you're part of the family. They are warm, generous, fun and creative, Margaret is a pianist and Jon is an artist. They are the perfect host family.

Iceland's rugged landscape is extraordinary. It has many unique features, from beautiful mountains, stunning waterfalls, fjords, glaciers, and usual rock formations to barren volcanic wasteland where nothing can grow. The landscape has an elemental rawness that's like nothing I've ever experienced. Visitors shouldn't forget the fabulous and relaxing hot pools or "hot pots" as they are called by the locals from their endless supply of natural geothermal heat. Icelanders congregate at these mainly outdoor pools at the end of the day. It is not a vacation spot for the faint of heart. You need to be prepared to endure the elements, but that's all part of the adventure. Full rain gear is essential unless you want to explore while sitting in your car or 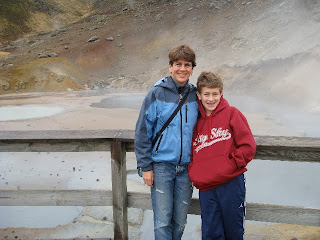 drenched. Although Iceland has experienced some financial woes recently, the spirit of the people is alive and thriving. They are survivors and have dealt with much adversity before. They are truly a hardy breed. I was also very impressed with the kindness and generosity shown to me and my son by several Icelandic strangers. Although I thought that this maybe would be my last trip to Iceland. I may try to return in several years, perhaps with my daughter Libby. It's just one of those places that makes you long to return.

As they say in Iceland,