I knew this should be a good race for me. The flat course is mostly double poling and does not require much technique: just keep the legs in the tracks and swing the arms as fast as you can! But it happened that my preparation for the race did not go so well and I even considered not doing it. First I had a really hard City of Lakes Loppet trying my best to stay ahead of Caitlin Compton. I ended up having the average heart rate higher than in any other race this season, including the Pre-Loppet which is just the first half of the course! 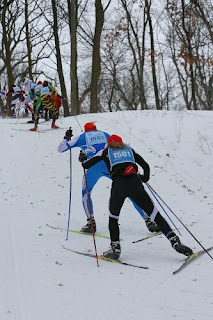 I should probably get some stiffer poles
Then I went for a workout on Tuesday morning. Usually there are a number of other skiers at these hours at Wirth. However I have not met a single skier during my 1.5 hour workout. That day I only had a mild frostbite on a finger but the next day after vakava’s intervals I got sick. I was not feeling well next day but did a half an hour ski Friday night. It seemed like the sickness did not impact my speed but I was still worried that I would not have enough gas for 42K. I still decided to do the race. And now I know that I was right! 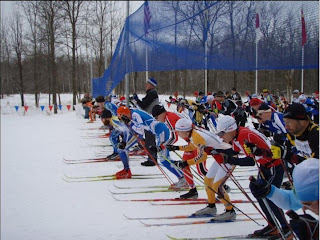 Getting forward on the poles

After the start I was in the end of the leading pack. I was not sure how I would feel so I only took a pull once and just for 1K. Luckily for me the pace was relatively slow, nobody tried to break away and we skied a large pack of about a dozen skiers. 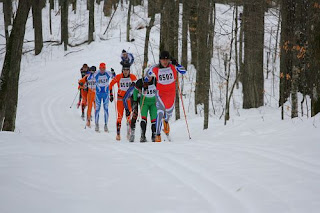 However, at the “big” hill many of us got stuck in the soft snow and 4 skiers made a gap on others. It took me a few K’s to catch up, but then the pace settled down again, and eventually other two skiers caught us up as well. So we continued this slow skiing in a pack of 7 skiers now. People were talking to each other and it seemed like we were just having a fun long Sunday ski and the race would only start somewhere on the Mora lake. However, after the last water stop Piotr Bednarski made a small gap on others. The gap did not decrease for a few K, so I decided to step out and catch him. I did not plan to break away at that point, I only wanted to see how I would feel at higher speeds. But when I caught Piotr and looked back I was surprised to see that nobody followed me. At that time I also figured that I would probably be able to maintain the pace for the 5K left to go. So I passed Piotr and went ahead. I turned back a few times, at the Vasaloppet center I could still see the chasing group but once we reached the lake nobody was in the visibility. In fact over the last 5K we made 40 sec on the 3rd place!
Unlike me Piotr had a kick and was faster on the Church hill. I poled as hard as possible and at the top of the hill in its most steep part my poles somehow went through without touching the ground. I fell down and Piotr passed me. I got up quickly and Piotr was so tired that it only took me a few strokes get him.
The last 200m proceeded smoothly without any additional falls. 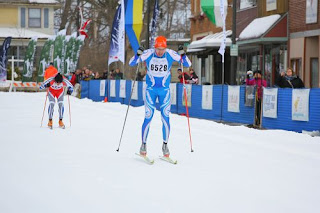