Slow going at the City of Lakes Loppet

Ever have one of those races where every time you get into a tuck on a downhill you can do nothing but slowly watch the skiers you are with pull away from you on that downhill? That was my race on Sunday the City of Lakes Loppet. Granted, I didn't have the legs to keep up with people very well on the uphills either. 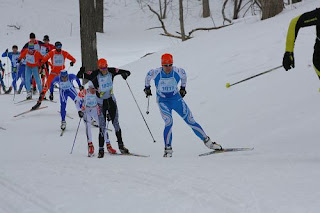 I started between Adam Swank and Andre Watt, and told them that I was going to let them pull ahead of me at the gun and just tuck in behind them, and that is what I did. This worked great, and got me out in around 10th place - which is probably about where I would hope to place at the Loppet if I had a great race and fantastic skis (I was seeded 17th if my bib is any indication). If nothing else it set me up to get in with a good group of skiers and hang with people as they went by. Unfortunately as skiers would come up around me, all I could do was watch them pull away. This wasn't for lack of trying. After all, I know just about every skier in the top 50, and I know which ones I can normally ski with. So when skiers who I am usually skiing with or even ahead of at most races were gliding past me, I was pushing hard to keep up with them. This left me with pretty trashed legs by the 7 or 8k point, as I was working harder than I should have been that early in a 33k race. 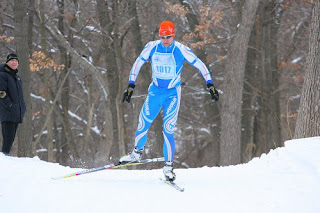 By the 10 or 15k point of the race I was skiing in no-man's-land by myself. As the trail wound through the woods I could see the group a minute or two in front of me, and also a group of 5 skiers about a minute behind me. I knew that skiing by myself for the last 15 to 20k of the race was not ideal, but skiing alone did allow me to relax and focus on skiing smooth and just trying to get my legs to recover. 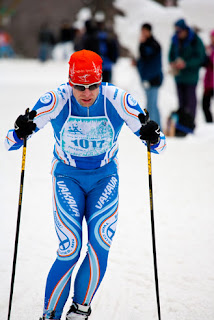 With 10k to go in the race I had put a bit more distance on the group behind me, and my legs were starting to perk up again. My skis were still feeling slow, but I felt like I could begin to look ahead to a couple of skiers who had fallen off the group in front of me and slowly reel them in. After catching 3 skiers on the last lake, I was able to muster enough of a surge to separate myself from them early enough so as to not have it come down to a sprint on the home stretch. 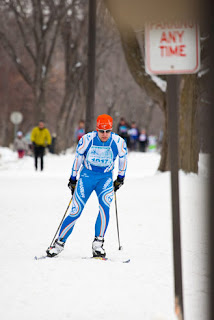 The race was good, the weather was great (i.e not sub-zero), and it is awesome to see so many people that are apart of the COLL festival. Kudos to everyone involved in putting this event on. Next year I just need to talk to Devin about my waxing first (and maybe put in a few more hours training over the summer too!)

Next weekend: Mora 35k, and a flat course that suits my racing style better. I know of at least 2 skiers who beat me at COLL who will be in that race, so I will have to pick up my game to defend my title.

Pics taken from skinnyski.com (thanks for the continued great coverage Bruce!)