Well, I’d be lying if I started this race report with my typical, “what a beautiful day for a race”, line.  Although some may think it was perfect, it wasn’t my favorite race weather.  The good thing about the conditions was that it was pretty much the same for everyone.  The start was pretty brutal; heading straight into the wind in a tight line of double poling that seemed to go on forever.  I tried to keep my eyes on Jan Gunther and stay right with her.  Going through the first feed station I got stuck behind a few skiers and fell back from the main pack.  I tried bridging the gap, but soon decided it was taking way too much energy going alone into the wind.  I tucked in behind a couple men until the wind direction changed.  After a few kilometers, when the wind was not as fierce, I tried again to bridge the gap to the next pack, but by this time the next pack was barely visible through the haze of thickly falling snow.


By my second lap of Knife Lake, it looked like I would be skiing the rest of the race by myself.  Then came number 502; I nick named him “Lake Angle”.  He was a smaller man that skied with a very unique style; his arm swing closely resembled the butterfly motion in swimming.  I can’t knock him, because he was skiing smoothly and going really fast.  I think we all had to modify our technique somewhat to be more aero-dynamic in the snow blast.  “Lake Angle” and I took turns pulling and drafting for a long time.


As my time on the lake was winding down, my skis were still running fast; I waxed them with Fast Wax’s HSF 30 over HSLF 30 and a cover layer of Flight Warm.  The “Uni-grind” stone grinding I had Finn Sisu do last summer really has improved my ski’s glide and seemed to be a good pick for this race.  I almost fell trying to climb the first hill off the lake.  After several more kilometers I came upon the unmanned “Y” with a highly placed sign telling skiers which way they should go.  It appeared to send the 58km racers to the right, and everyone else to the left.  The confusing part was the additional marker at snow level directing the 58km relay to the right.   The trail to the right looked pretty fluffy compared to the trail to the left.  I second guessed my trail choice after skiing a ways down the trail marked for the 58km race.  I turned around and skied back to the sign to take another look.  By this time another 58km skier came by and we decided together that this was indeed the correct trail.  Before I knew it, Bell Tower was right in front of me with the finish line right around the corner.  I finished 3rd female overall and first in my category 5 age group.  Shortly after I crossed the finish line, my 13 year old son, Joshua, finished the 13 km race tied for 3rd place overall (first in his 12-13 year old age group).  My 9 year old son followed shortly behind Joshua in the same race with an overall place of 29th (first in the 11 and under age group).  My boys absolutely loved receiving their Dalia Horse awards at the awards ceremony. 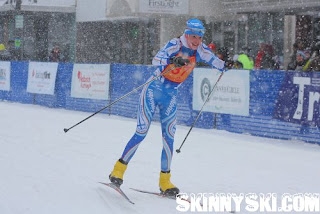 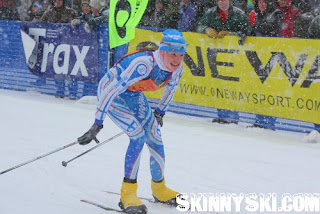 Posted by Bonnie Weiskopf at 2:57 PM