With five kids racing Nordic, there aren't many weekends left for me to race.  Knowing the first weekend in February would be relatively open, I decided to register for the Minne Tour.  The Minne Tour combines the results from three races, the Finn Sisu Sprints on Friday night, the Hoiggard's Classic Marathon on Saturday, and the Columbia Sportswear Skate Marathon on Sunday.

I've never really been a sprinter, so my strategy for Friday was to use my "B" skis and just ski for fun and not to tire my legs. My "A" skis were half ready for Sunday's race, so I didn't want to ski on them.  I ironed in some Fast Wax Flight Cold and called my skis ready.  Teammate Kathleen DeWahl, who was skiing slightly ahead of me at the time, made a fatal mistake and started to take a wrong turn.  I followed her, but got back on course quicker allowing me to finish 2nd in my heat and qualify for finals.  I was 4th in the finals which gave me a 15 second deduction for my combined marathon times.

Friday evening my stomach was grumbling and my gut was in bad shape, this continued through Sunday morning.  I took some Pepto Bismol and an antacid and hoped for the best.  While racing on Saturday my stomach didn't bother me much; Saturday evening was a different story.  Well, I got off to a pretty good start, just avoiding the pile-up at the start.  I probably over waxed my skis for kick considering they are hard wax skis.  I put on a thick layer of Guru Extreme 39 klister and covered it with Rex 1814. 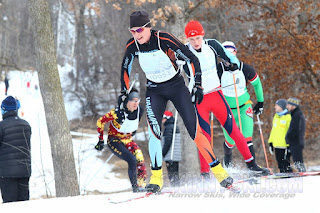 My kick was really quite good, but I sacrificed glide.  Alice and I traded places many times in the first two laps. 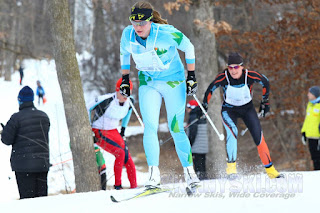 She would catch me on the downhills and I would pass her on the ups.  After about two laps she fell way off and I was joined by teammate Kathleen for pretty much the rest of the race. 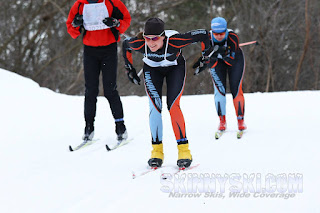 I ended up in 4th place in the classic marathon, less than 30 seconds behind Kelly Skillicorn.
Saturday night I celebrated my husband's 50th birthday with my in-laws.  My stomach was really hurting at the restaurant and I didn't think I would be able to race on Sunday.  Knowing I would be in the mix for the cash prizes I thought I would at least give it a try.  My skis were fast, I used Fast Wax Flight cold as well as other pre-fluoro layers to help repel the dirt and for abrasion resistance. I felt better and better with every lap I skied.  On lap four I was lapping a slower skier around one of the quick turns by the machine shed.  The skier took the turn a bit tight and fell just in front of me.  I hit hard on my left butt, the same hamstring area I had surgery on a couple years ago.  I'm still recovering from the fall and hoping I didn't re-detach part of my hamstring. I dug deep and skied my last lap and a half to finish 4th in the skate race.
I ended up winning $400 in the Minne Tour coming in 3rd place overall.  Even though Alice Flanders beat me in the skate race, I had put on a sizable time advantage over her in the classic race, allowing me to edge her out.  Go team Vakava!  Many strong Vakava finishes this weekend.
Posted by Bonnie Weiskopf at 3:22 PM