Driving to Cable from Stillwater we saw a little more white on the ground, but the snow coverage really started to improve once we got North of  OO.  I had heard the Cable area receive about 8" of snow in the last week.  This was dry, lake effect snow; something I hadn't seen all winter.  When we arrived in Cable, Friday evening, there was a bright full moon illuminating the fresh snow banks.  The trails were calling me, persuading me to ski on them, but I had to say no.  I still had skis to wax for the next day's Pre-Birkie and was feeling under the weather.  My kids and I had all been fighting a virus for the past week or so and I was already sleep deprived.  After getting my kids to bed I read the wax recommendations from Dan Meyer on his Fast Wax web page, then I got to work. First a layer of HSLF 20 blue, then another layer of HSF 20 tan, then a top coat of Flight cold.  I put some structure in and then ironed in a hard wax binder, and another layer couple layers of Rex  TK1814.  The rest of the job I would do on sight the next morning.

I woke up Saturday morning to a light drizzle.  It was drizzling all the way to Hayward; naturally I became worried about kick wax selection.  I was registered to do the 42 km classic race.  At last year's Birkie I double poled most of the race because I "missed the wax". I had flash backs and really didn't want a repeat of last year's Birkie. I said a prayer, asked for some advice from other racers and then put on a couple layers of Ski-Go red.  It was slipping on Lake Hayward and I hadn't skied on the course the previous day so I didn't know what to expect on the trails.  I saw some people using klister.  By this time I only had about 20 minutes to the start so I opted not to remove my wax in favor of klister, but to add a couple more layers of Oslo purple.  My skis are not klister skis, they are a fairly low camber hard track ski, so I imagined them being draggy with all the layers I had put on.  Without trying them, I headed for the start, stopping to go to the bathroom along the way.

I was lined up with many men and a few women doing both the 42km and 26km races; I figured the third row back was about right for me.  We started off really slow.  I was slowly moving up in the field realized I should probably slow down or I would be leading the whole thing.  I was a bit puzzled that we weren't going faster, especially considering most of the racers were only going 26 kilometers.  By about the 3km mark it was just me and a couple of boys from Park Center High School that were up doing the 26km event.  The results show another man winning the 26km classic by about 24 second over the boy from Park Center, but I didn't seem him out there.  Anyhow, the two boys from Park Center were good company on the trails.  I asked them if they would consider continuing on after completion of their race, they unanimously said "no". I really couldn't believe I was leading the 42km event overall.  Once I was the overall winner of a 10km running race, but never a marathon ski race.  The day was beautiful, the snow was awesome, and I was feeling relatively good, considering I was fighting a virus. Slowly I saw another skier, besides the three of us, just meters behind.  By about 20 kilometers or so I decided I had better let him pull for a while or I could soon be overtaken.  Tom was from Chisago and was fun to ski with.  We traded off pulling several times over the next 15 kilometers or so.  With about 4km to go the ball of my right foot was hurting to a point where it was hard for me to herringbone the uphills; I had to do kind of a one leg herringbone. This is where Tom gapped me. I finished a close second about a minute behind Tom in a time of 2:37:07. Now that I completed this race, I feel better prepared for the Skate Birkie in a couple weeks. Bonnie finishing the 42km Classic Pre-Birkie

Last year my youngest two, Bryce and Ethan, currently 11 and 8 respectfully, raced the 10km event at the Pepsi Challenge.  They had so much fun they wanted to do it again this year.  Unfortunately, this year the race conflicted with the Midwest Junior Championships, so we would be unable to attend.  Instead, I suggested they try the 12.5km North End Classic race. So the day after the Pre-Birkie it was my pleasure to accompany my boys on this adventure.  Even though I had a good idea of what kick wax would work from racing the classic Pre-Birkie, the temperature was a few degrees colder.  After settling on a wax, I got my boy's skis ready and then sent them ahead of me to ski to the race start, which was a couple kilometers away on the power line.  When I arrived at the start I couldn't find my boys.  I was somewhat panicking thinking it was really stupid to send them ahead, what if they got lost?  What if they took a wrong turn?  I quickly started back.  Within a couple minutes I saw them.  Oh my, was I happy to see them!  They had taken a wrong turn, but figured it out before they got lost.  Bryce is #401, Ethan is #402 (far left), and I am #403 (behind Ethan). 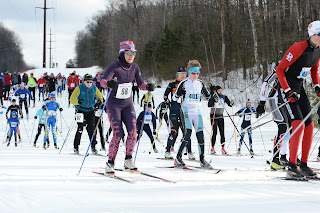 Photo by Kelly Randolph
For safety, I skied behind my last skier. I ended up skiing with Ethan for the whole race. 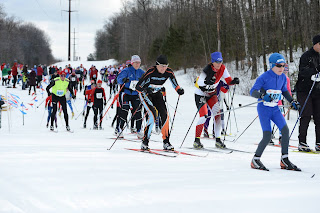 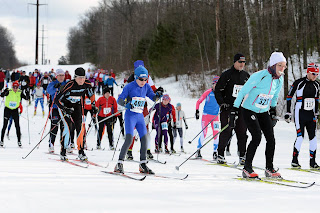 Photos by Kelly Randolph
Bryce skied all on his own and reported very nice complements from other skiers around him. This was Bryce's longest race to date. 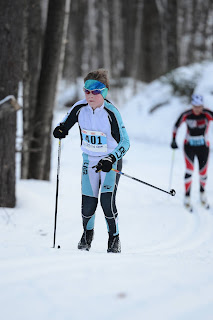 Photo by Kelly Randolph
Ethan said he was getting tired around 8km so I fed him a Shot Blok and that seemed to help him. This was also Ethan's longest race to date.  Both boys are proficient classic skiers. I was super impressed by their kick double poling. 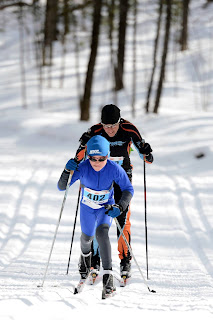 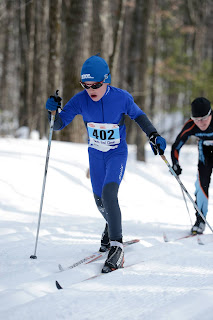 Photos by Kelly Randolph
Ethan was ready for the finish line, and the donut holes that were waiting there for him.  Bryce finished 28th out of 70 skiers in his race, with a time of 54:54.  Ethan finished just over five minutes behind Bryce in a time of 1:00:37 in 38th place overall.  All in all we had a great weekend enjoying the best winter has to offer and spending some quality time together.
Posted by Bonnie Weiskopf at 8:41 AM