This was one of those races I wish I could rewind and get a do-over.  This was not my first time racing the long course, but it has been a few years since we had enough snow to do the entire course (less the Minikahda golf course section).  Because I live in Stillwater, I only ski the South portion of this trail during the City of Lakes whole course events.  I'm not the kind of person that pays much attention to the trail when I race and I'm not good at remembering courses.  With that said, before racing I did take a two minute look at the trail map and gathered a couple rules of thumb I could remember:  there are five feeds, three big lakes in the second half, and the half way mark is just past the third feed.  That was all I thought I needed to know.  Of course I didn't give myself enough time in the morning, and of course our shuttle bus from Mortenson had engine issues.  I arrived at the Wirth chalet and ran to the start to place my skis near the line.  I talked to Mike, a start official, and told him to remove my skis from the start area if I didn't return in time.  Then I ran to the big tent and got a bib, changed into my boots, and threw my bag into the truck.  I arrived at the start line with three minutes to go time.  Mike was impressed I made it back in time. 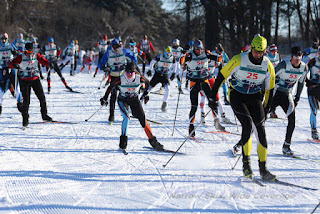 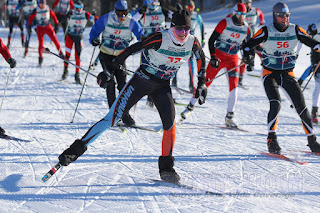 The race was going pretty well.  My technique was a bit jerky until I could get warmed up.  I (37)skied some of the North side of Wirth with my teammate Erik Pieh (18). 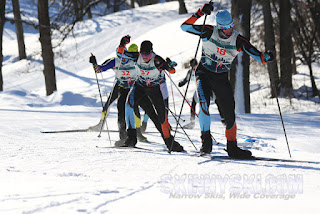 He was pulling away from me on the downhills and I didn't want to go hard enough to catch back up, so he slowly drifted away. Bye, bye Erik! I pretty much skied the rest of the race alone.

Okay, so you are probably wondering why I would want a do-over on a sub zero degree marathon that I pretty much skied alone for the majority of the kilometers.  At approximately 20 1/2 kilometers I came to a split trail.  There may have been a trail marker, but if there was I didn't see it.  All the other intersections were well marked and gave me no trouble.  Anyhow, realizing I didn't know which way to go, I stopped and asked the official blue coated person standing near the junction, "what way do I go".  They replied, "what race are you doing? the 40km?"  I said yes, the 40km (I figured it was close enough to the shortened 42km race that was now 38kms).  They said, "go right". At lease that is what I thought I heard.  So, I turned around and headed down the other trail.  I was a bit concerned because the number of ski tracks were just about half of what I had been skiing on. I looked back and saw another skier not that far behind, and that reassured me. In addition, I thought if I were going the wrong way, the trail official would have yelled for me to go the other way.  At about 25kms my faster teammate, Craig Cardinal, passed me in a pack of other skiers.  Craig yelled, "you took a short cut".  That was when I realized what had happened.  According to the Loppet Foundation Blue Course Map, the short cut I took at 20.5kms cut off just over one kilometer.  The rest of the race I was so distracted, thinking, should I even finish, should I ski the 3 or so kilometers back to where the trail split, should I go fast or just ski to the finish, ...  I tried to gather myself together and pick up the pace.  When I reached the lake formerly known as Lake Calhoun my skis felt much faster.  I ended up passing two skiers that looked like dots in the distance on the lake before reaching the finish line.  Man was the wind off the lake strong!

Right away after finishing I told the race director what happened, that I had taken a short cut. I later found out quite a few skiers took this shortcut. Another teammate of mine said he, and the 15 or so skiers in his pack, all took the shortcut.

According to mtec RESULTS, my per kilometer time was 3:10.  With skipping one+ kilometer of the race it should have been slightly higher than this.   I'm guessing my adjusted time should have been 3.5 to 4 minutes longer because the part that was skipped was said to have been hilly.  Adjusting my time would put my finish time at around 2:03:30.  Still safely in front of the second placed woman, but well back of my 22nd overall (men and women) position Loppet Results. I would have been around 33rd in the overall results.

I am so bummed about this because I was having a good race and now it’s not really like I won. I don’t know if there would have been any way to sort out who took the shortcut and who didn’t so they let the results go. I wish there was a way to sort it out and give us an official time penalty or make an announcement saying if you think you may have taken this short cut let us know and we’ll give you a free entrance into next years race. Both solutions sound good, but would not be very practical.  I would not have wanted to be a race director for this race.  They did the best they could with having to make a decision on the fly. I don’t think there was any good solution.

I'm trying to forget this one and looking forward to my next un-abbreviated race and being happy with my results.
Posted by Bonnie Weiskopf at 3:28 PM