Whoever says Winter is boring is obviously not a Nordic skier, and definitely not a mom of five Nordic racers!  This season has been a whirl wind for our family.  The last Midwest Junior National Qualifying race weekend was held in Cable, WI on January, 20-21.  We have a cabin in Cable and so we housed and/or fed a large portion of my son's Michigan Tech team, in addition to our own five racers.  I didn't have/couldn't find pictures for all of them. 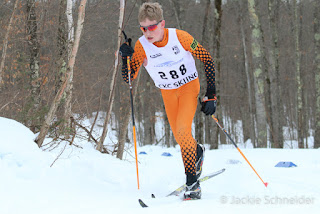 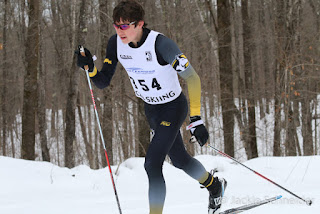 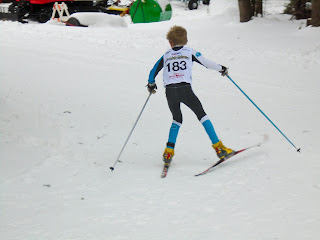 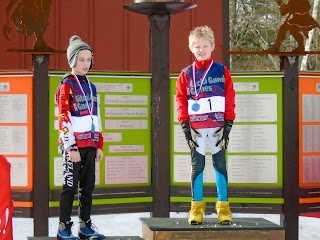 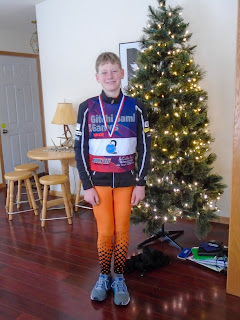 On Saturday, after the classic race, I headed home to wax my skis for the Master's World Cup 15km Freestyle race to be held the next morning. I figured missing my kids' Freestyle race was better than missing their Classical race because kick waxing can sometimes be difficult and I wanted to help with that.

I decided to race on my new Salomon BLUE skate skis that I just had stone ground at FinnSisu.  Tom (FinnSisu stone grinding expert extraordinaire) did an amazing job on my skis.  In addition to the Fast Wax that was running amazingly fast Sunday morning, the stone grind, I believe, enhanced my ski's speed.  Going into a race it's hard to know how your skis speed compares to that of others; I must say, mine were running very good that day. 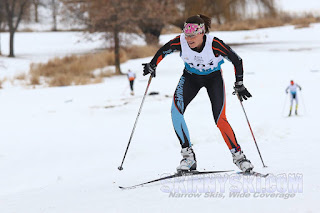 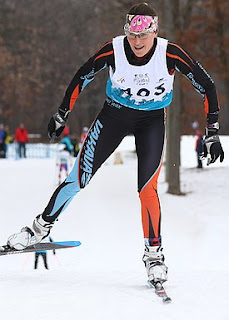 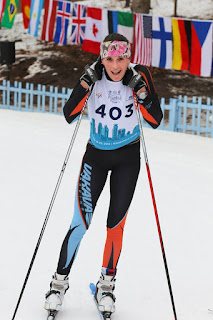 My time ended up being the fastest 15km time in the overall women's field by over a minute.  After the race I enjoyed lunch by myself at Wendy's.  I even had enough time to wax my skis for Monday's 7.5km classic race before the rest of my family returned home from Cable.

Monday's classic 7.5km race was a race against time to finish before the snow storm hit.  It was lightly snowing in the morning and accumulating just slightly in the tracks.  My kick wax selection wasn't the best, but at least it wasn't icing up.  I won my 04 age class (45-49 yrs) and was just behind Norway's Ragnhild Bolstad (age group 05, 50-54 years) for the overall. 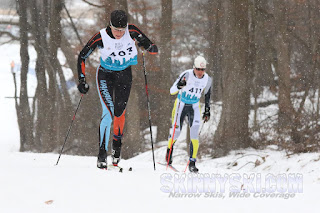 I don't want to make excuses, but her skis did seem like they were kicking better than mine.  I talked to her after the race and she confirmed that she "had really good skis".

After a day off of racing, on Wednesday, I raced in the relay event. It's a 4x5km relay where the first two legs are Classic technique and the last two legs are Freestyle. I was really hoping they would pick me for a Freestyle leg because I didn't want to mess with kick wax again.  No, they picked me to lead out our relay in the Classic leg. 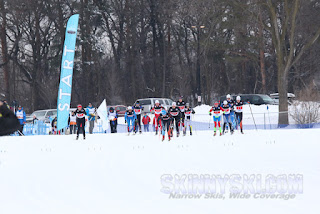 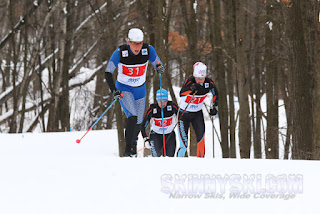 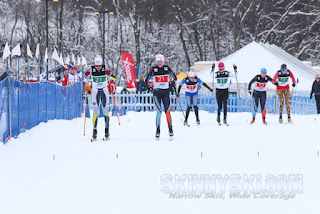 I started in the second row behind a less fast Italian skier.  They said we had to stay in our lane in the double pole zone.  By the time we passed the double pole zone and I could cut over I was way behind the leaders from the other age groups.  It took me almost the whole race to catch up and pass the other skiers.  I tagged my teammate, Kim Rudd, in first place, just a couple seconds ahead of the other teams.  Our USA relay team won our age group 03/04, and finished 2nd overall, .2 seconds behind USAs age group 05/06.  It was another fun day racing with good friends in my relay and against other relays with former USA and Olympic team members.

My last of three races at the Master's World Cup was on Thursday.  It was the 30km Classic event.  Like all the other mornings I started my day driving to Theodore Wirth park in the early morning; sipping on a cup of instant coffee and eating my bowl of cereal.  I eat in my car so save time on the long drive to Theodore Wirth from Stillwater.  My metabolism is really fast, so it really isn't too close to race time for me to eat.

With the new snow mixed in with artificial snow, I found kick waxing again to be challenging.  It seemed to be working for my test skis, but when I put the same formula on my race skis I didn't have enough kick.  I added more and that negatively affected my glide.  By this time I had too many layers of kick wax on my race skis and only 20 minutes until race start.  Time to call it good enough and run from the Wirth chalet parking lot to the race start about 1/4 mile away. God is so... good; even in the panic of the moment He gives me inner peace!  During the entire race I had a tune repeating in my head, "if I am for you, who can be against you".  Near the end of my first lap they re-directed the racers up the sledding hill.  Apparently a train was parked over the tracks on the other side of the road.  The race officials made a very fast decision to change the race course from a 2x15km race to a 3x10km, much hillier race. 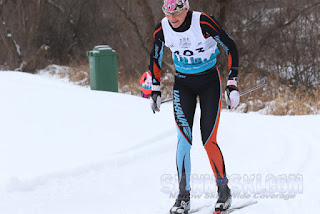 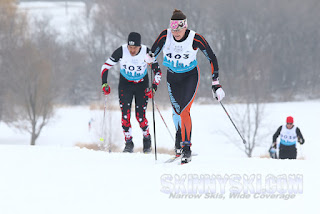 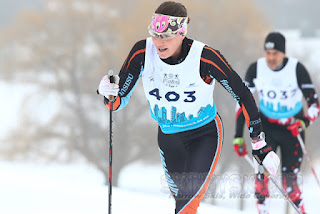 I ended up winning my age group and having the second fastest 30km time in the overall women's field, behind Norway's Ragnhild Bolstad.

Because family and coaching commitments, I missed all of the awards ceremonies, except for Friday's closing ceremonies.  This set of races will go down in my record book for frequency of racing (4 races in 5 days), one huge snow storm, one train parked in the wrong place, one death of a racer on course, and many smiling skiers.  Congratulations to all of team Vakava! 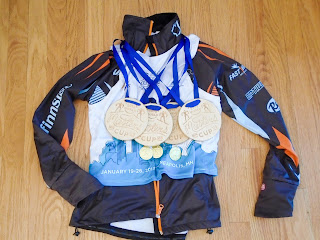 Posted by Bonnie Weiskopf at 2:04 PM