It was great that for the first race of the Tour organizers expanded the snowmaking loop to 5K. It was also great that, unlike the previous year, the citizen’s race was separated from the pros, and I was able to start from the front line. As the race rolled out I found myself at a comfortable 3rd position. However, my A rock skis (last season’s racing/training skis) were not particularly fast and I was being passed on the downhills. I then settled in the end of the 7-8 people pack.
Fortunately, no one broke away and as we were entering the last long climb on the second loop, I started pushing harder. I got to the front at the mid of the climb. I first intended to just stay there and then see what can I do at the finish sprint, but after a quick visual assessment of other racers condition I decided to make a move. 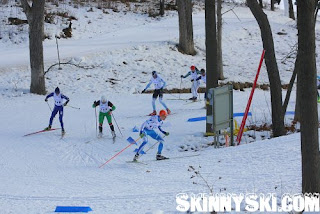 As I got out of the old stadium my burning legs made me worry if I will get caught, but at the U-turn I found out that I made quiet a gap, and then there was a multiple of long downhill rest – short uphill sprint things, so when I was at the top of the final climb they were only at its bottom. It was the first skate race I have ever won!
I raced two more Tour races as well as Marine O’Brien skate race, which made for two intense weekends. Gained some points in the FastWax Series, but lost a point in Eugene vs Nate series (currently at 2:1). It was a great training and I am looking forward to the Birkie!
Posted by Eugene at 7:32 PM